June Unemployment Rate At 5.3%, But Record 93.6 Million Not In The Labor Force

Home/June Unemployment Rate At 5.3%, But Record 93.6 Million Not In The Labor Force
Previous Next

June Unemployment Rate At 5.3%, But Record 93.6 Million Not In The Labor Force

The tragicomedy from the BLS continued today with the June Employment Report. The Bureau of Labor Statistics reported an increase of 223,000 U.S. jobs for the month of June and an unemployment rate of 5.3 percent. The labor force shrank in June by 432,000, with those not in the labor force rising by 640,000 in June. That’s how the BLS unemployment rate was magically reduced. There are now a record 93.6 million people not in the labor force! That’s more than 37 percent of the labor force vaporized for the sake of a meaningless headline unemployment number.The average workweek, and average hourly earnings were unchanged. Part-time jobs rose 372,000 according to the household survey. Yeah us! It’s worth noting that while the U.S. population has continued to increase, full-time employment is still below the prior peak in 2007.

Maybe this is what Stanley Fischer considers success when he suggested that the U.S. is near full employment? The Federal Reserve has been an endless source of comedic entertainment during the last few years, but this revelation from Mr. Fischer is a real gem. Maybe he doesn’t know how to access his own charts? As a reminder, the labor force participation rate of 62.6 percent is now back to 1977 levels and at a 37-year low. I noticed this week that the Greater Houston Partnership cut their prediction for 2015 Houston jobs in half. At least the GHP is finally waking up to reality. I wonder how long it will be before they realize they are still irrationally exuberant?

“I know, let’s shove a corporatist trade agreement, trading jobs for corporate profits, down the nation’s throat over the people’s strong objections, and call it a jobs creator in true Orwellian fashion, while transforming the US into a nation of insecure, underpaid servants. Oh, well done.” Jesse’s Cafe Americain. 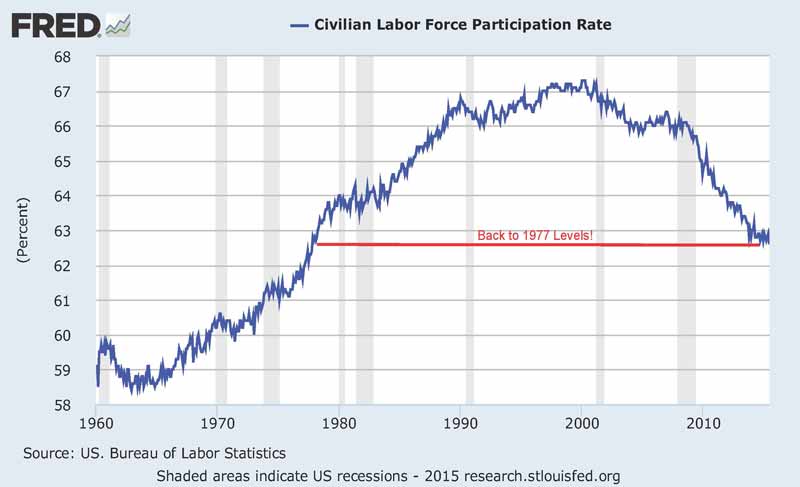