The Census Bureau reported that January housing starts and permits fell from downward-revised December numbers. Housing starts posted at a 1,099,000 annual rate in January, down from December’s rate of 1,143,000. Housing permits also fell in January, posting at a rate of 1,202,00. Single-family housing completions in January came in at a rate of 693,000, down from December’s rate of 703,000.

Despite higher year-over-year mortgage purchase applications, new home construction is still struggling in the Fed’s echo-bubble of inflated asset prices. This is why you see more advertisements of low-down-payment purchase options and even zero-down financing schemes to lure in more prospective buyers. Major homebuilder stocks have been pummeled this year as the market is finally cluing into the fact that much of the growth we’ve seen in recent years was just a mirage facilitated by central bankers. I would also point out that our own U.S. central bank will by shelling out close to $11.5 billion in free money to member banks this year for doing nothing other than sitting on excess reserves.

Low mortgage rates have helped provide some support to the housing market as we started the year, but that won’t solve the problem of artificially inflated asset prices. Many sales reps in the local market will continue to offer an optimistic view of the housing market this year, but I wouldn’t bank on it. While I think we may see some bumps in activity and even prices in select submarkets, I see no reason to believe that the current downtrend in our housing market is over. If the Empire State Manufacturing Survey’s latest numbers are any indication of what we’ll see next month here in Texas, I am expecting things to get worse before they get better.

As you can see from the latest Quarterly Report on Household Debt, many Americans are already burdened by high debt balances, particularly student and auto loan debt. The whole deleveraging consumer story is just that…a story. 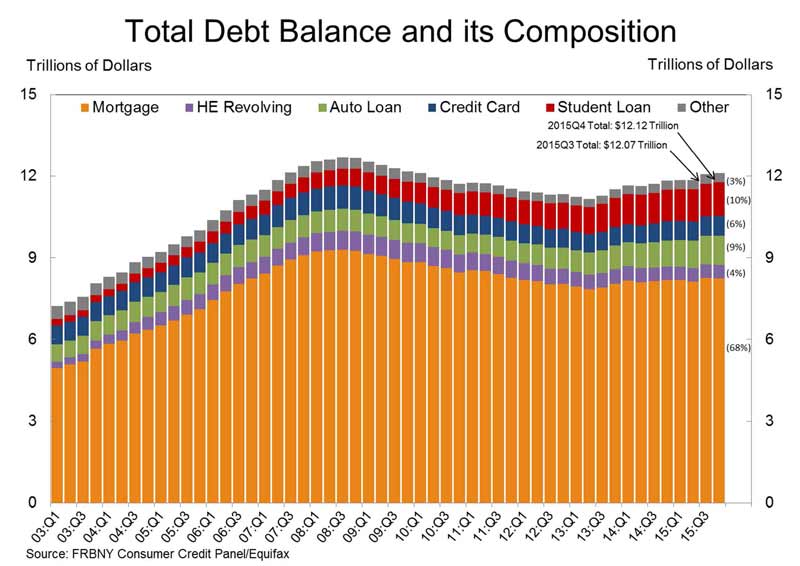