The reign of economic error holding back the U.S. housing market was on display again this week. New home sales for December came in well below estimates, falling 10 percent from the November euphoria. The National Association of Realtors reported that existing home sales softened to a seasonally adjusted annual rate of 5.49 million in December. That was a 2.8 percent decline from the previous month, and roughly flat from the previous year. Year-over-year declining mortgage rates for most of 2016 helped to make it the best year for existing home sales since 2001, but we are still well shy of the previous highs in home sales activity, particularly when you adjust for population growth. NAR chief economist, Lawrence Yun, alluded to the problem.

“Housing affordability for both buying and renting remains a pressing concern because of another year of insufficient home construction…Given current population and economic growth trends, housing starts should be in the range of 1.5 million to 1.6 million completions and not stuck at recessionary levels. More needs to be done to address the regulatory and cost burdens preventing builders from ramping up production.”

That was a decent attempt at an explanation of what’s really plaguing the U.S. housing industry, but the whole truth continues to get short shrift in housing industry circles because the same dynamics that have been propping up sales for the last several years are the same ones eating away at organic supply and demand. I recently discussed why home builders can’t keep up with housing demand. New home sales continue to lag what we would normally see in a real economic recovery. This disturbing gap between new and existing sales has been an ongoing theme of this “recovery”. 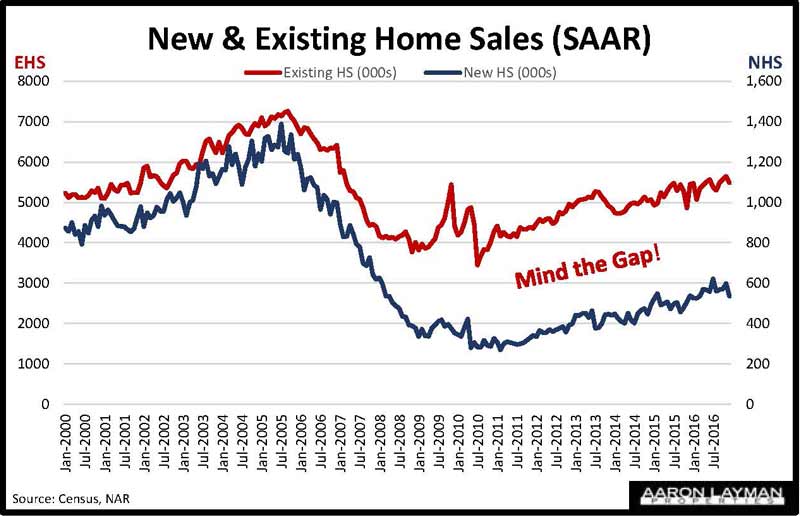 This disturbing gap still exists because we never had a real market cleansing after the last crash. What we did receive was giant wealth transfer from the bottom to the top. While the Fed was busy reflating U.S. asset prices, and by default virtually every piece of real estate, the parasitic financial class has continued to feast on the government’s handouts. As it turns out we received another example of this intricate dance between Washington an Wall Street courtesy of an S-11 filing for Invitation Homes (aka Blackstone). It appears The U.S. government (spelled U.S. taxpayers) will now be subsidizing America’s largest landlords in more ways than they knew. Call it “foaming the runway” on steroids.

Invitation Homes, American Homes 4 Rent, and Starwood Colony Homes are the three biggest private equity players in the the buy-to-rent scheme that has warped major metro housing markets across the country, but there are certainly others. The financialization of rents has been all the rage following the bank bailouts and subsequent Fed injections of QE1, 2 & 3. Private equity feasted on the cheap liquidity while real-owner occupant buyers were struggling to find a decent place to live at an affordable price. If you want to understand why home prices and rents are so high when the economy is still rather weak, take a look in your own neighborhood and see what you find.

Along with the revival of house flippers, the odds are pretty good that you can now find a private equity landlord in your neighborhood. This metastatic cancer has flourished under the Fed’s trickle-down monetary mayhem. In my case there is an example right around the corner. This home has been on the market for lease for about 7 months now. No landlord in their right mind would let a house like this go vacant for that long, but these private equity parasites are obviously bankrolled better than your average mom-and-pop investor. Throw in some hefty subsidies from Uncle Sam and you can afford to muck things up for even longer.

The irony here is that the government’s stated mission is to improve home ownership. That’s the advertised mission at least. The part that doesn’t get much airtime is the cronyism and graft like the backdoor bailout just mentioned. Instead of restoring some semblance of order in the housing market, it looks like the government is going to encourage these private equity landlords to hold on to their portfolios longer than they should have ever been allowed to. This is only going to keep more potential homes off the market at price points where demand is strongest. It’s a win-win scenario for the financial industry and another royal screw job for the American middle class, many of whom are now struggling to rent a decent apartment.

So far the new administration has made a few good calls on the economic front. Throwing out the TPP and scuttling the ill-advised FHA mortgage insurance premium cut are positive steps. The first hundred days are shaping up to be every bit as interesting as we might have expected. Before you get too excited, however, remember that we are only a week into this adventure and it could still end up being an unmitigated train wreck. If you seriously think the Donald is going to drain the swamp, it’s probably time to remove the blinders. The model of greed that permeates the U.S. economy hasn’t changed. We just have a new bellman posted at the revolving door.

Misery loves company, and the odds are pretty good that the titans of finance will continue to use the housing markets for profit and plunder. The new administration is heavily vested in private equity connections. When it comes to PEU, there is no such thing as red and blue. The color of money trumps party lines and populist messaging. It’s going to take a lot more than a slogan to fix the issues within the housing market, and the economy in general. For now Wall Street is still calling the shots at the expense of the American public. 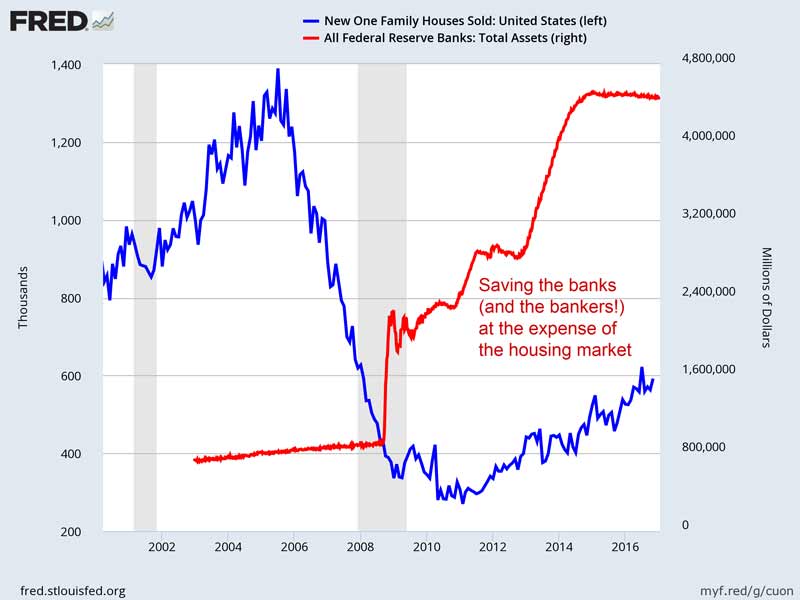 “The party told you to reject the evidence of your eyes and ears. It was their final, most essential command.” George Orwell