It certainly appears we will see more new home sales revisions in the months ahead. If homebuilders actually did put more inventory on the ground heading into the end of the year, I hope they allocated more sales incentives. They’re going to need them! Mortgage purchase applications declined 10 percent from the previous week after the election surprise caused a spike in yields.

To all of my fellow Realtor colleagues and housing cheerleaders, I can’t make it any clearer. Higher mortgage rates are not going to help a soft housing market already suffering from an affordability problem. Today’s single-family permits data from the Census indicate homebuilders know there is likely some rough sledding ahead, even if they don’t want to mention it publicly.

Let’s say you are looking at a new $400,000 home and you had previously obtained a quote from your lender with a qualification based on a rate of 3.5%. At that interest rate your monthly P&I payment would have been $1437. If you failed to lock in your rate before the election post-mortem, you could now be looking at a 4.0 percent interest rate and a monthly P&I payment of $1528 per month. Granted, that’s less than a $100 increase, but still a rather unwelcome surprise for anyone shopping for a home.

Here in the Houston area, builders and developers are optimistic, but they are also worried about low-ball offers and weak sales velocity.

Will Holder, President of Trendmaker Homes (now part of TRI Pointe Group) reflected on the the competitive landscape in the Houston new home market:

Those buyers will probably be demanding even more with the recent rise in mortgage interest rates.

So how did the sell-side establishment spin today’s Census numbers? Take a look at the horse manure at MarketWatch from a supposed “reporter”. He apparently doesn’t even understand the difference between homebuilders and apartment developers; Ditto for the difference between “making” plans and construction that was already in the works. Here’s where the spin goes overboard…

“A surge in job creation and improved income growth has made buying a home more affordable for many Americans who had put off a purchase in the wake of the Great Recession.” ROTFLMAO

Yes Jeff, 80 percent of America is rolling in cash, and they are chomping at the bit to get a piece of the American dream. Just don’t mention this now probably entails renting an apartment. The U.S rate of homeownership is at multi-decade lows, and single-family permits just fell flat on their face. Some “recovery”! 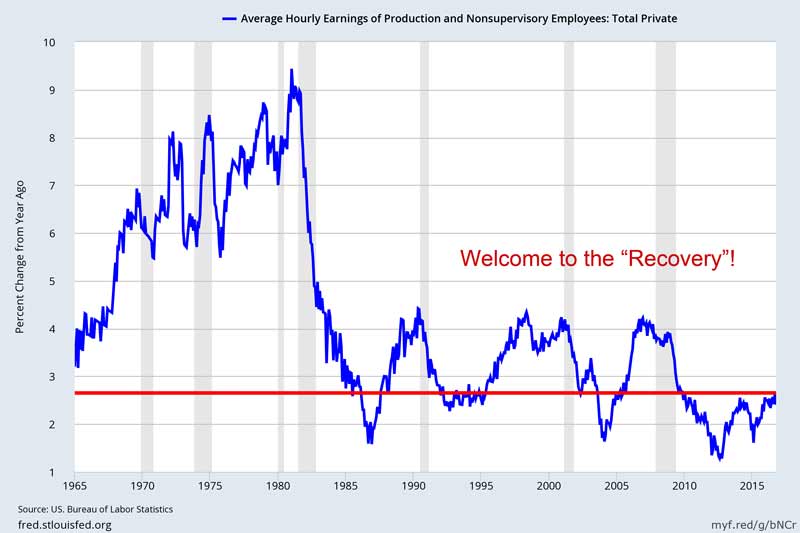