The new Denton High School campus design plans were presented to the board at Denton Independent School district’s November 13 meeting. The $194 million project near North Bonnie Brae for a new Denton High campus is scheduled to open in the fall of 2022. The new campus is part of Denton ISD’s 2018 bond package that contained a number of campus improvements and additions to handle the growing student population in Denton ISD.

VLK Architects has been working with Denton ISD, along with a host of consultants, teachers and administrators, to put the project together and bring the students of Denton High a campus that is both modern and functional. The new Denton High Campus will entail a roughly 490,000 square foot two-story campus. The new high school is designed for a 2400 student capacity, but it could be expanded if needed.

The new campus for Denton High School will feature a centralized library in a type of ring concept. There will also be exterior access to the library, fine arts and gymnasiums. The new campus will require the widening of Bonnie Brae with the coordination of city officials. The practice fields on the west side of the DHS campus near Westgate will not have lights according to the designs, alleviating some concerns of residents in that adjoining neighborhood.

An existing gas well on the southeast portion of the DHS campus will be near the proposed softball and tennis courts, but not too close.  According to Superintendent, Jamie Wilson, those areas are more than 500 feet from the well, or twice the city setback requirement.

You can read the entire schematic design presentation for the new Denton High School Campus. 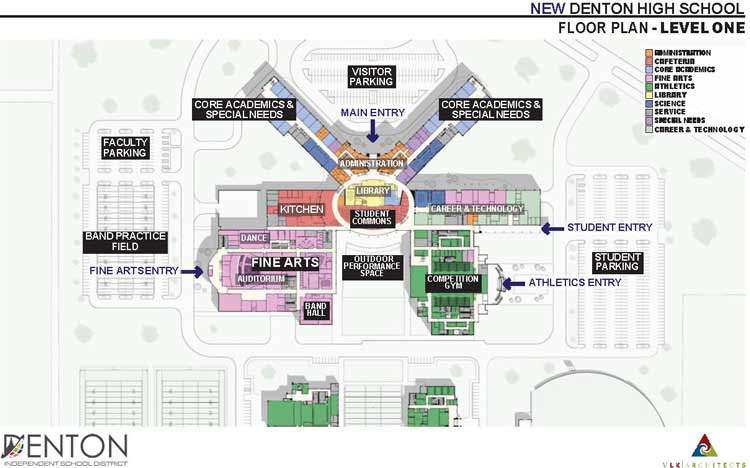 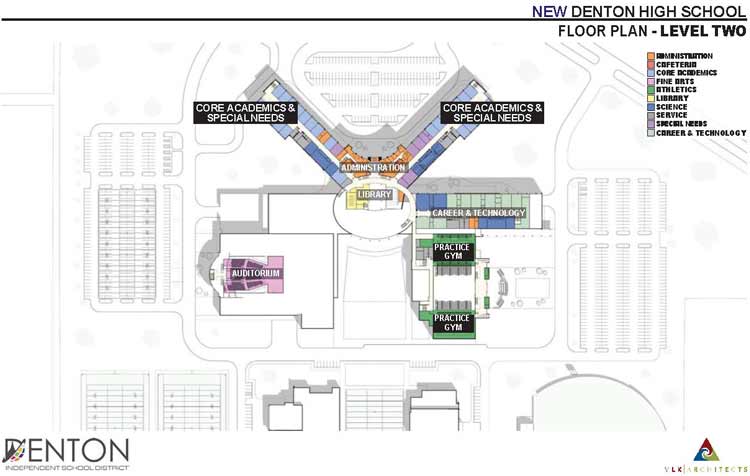