The Denton City Council received a detailed presentation from Hillwood and Stratford Land representatives during Tuesday work session. The proposed master-planned community of Hunter Ranch and Cole Ranch would encompass roughly 6000 acres and bring 15,000 new homes to the City of Denton, boosting Denton’s housing stock by nearly 50 percent if the project were to be approved.

A central question at the Denton City Council meeting was whether or not a special financing district or MMD (Municipal Management District) is the best path for the city to partner with developers Hillwood Communities and Stratford Land on building out the southwest portion of Denton which currently has little in the way of regional infrastructure to support a housing development, much less a housing development of this magnitude. A resolution allowing the special district to be taken to the Legislature for creation is one of the first hurdles that Council will have to agree on. After that, developers and Denton city leaders can hash out the finer details of the development should it move forward.

The Hunter Ranch, Cole Ranch project presented by Hillwood and Stratford Land is impressive in both scale and detail. Located just north of Robson Ranch along I35W, the new proposed development would entail roughly 35 years of growth in Southwest Denton that would literally transform the look and feel of the area. Like many of the previous projects by the developers, Hunter Ranch and Cole Ranch would be feature-rich, master-planned with mixed use areas for single-family, commercial, multi-family and even possible industrial site space. With 6,000 acres to work with, there is ample flexibility. Developers pegged Pilot Knob Hill, the highest point in the city, as a potential location for a corporate campus.

Developers are pitching the project to Denton City Council with the request of a new MMD special taxing district that would limit the city’s risk while also giving developers access to more preferable financing terms. On the flip side, the proposed MMD district would also give residents in the proposed Hunter Ranch or Cole Ranch a higher property tax bill than other Denton resident outside of the special taxing district. An extra 55 cents per $100 valuation would put the total tax rate for Hunter Ranch and Cole Ranch near the three percent mark.

Assuming the Hunter Ranch and Cole Ranch does move forward and receives approval for the proposed special taxing district, actual development still might not happen for several months. The economic landscape could look a bit different if and when Hunter Ranch and Cole Ranch open to their first home buyers. Home sales are already rolling over in Denton County, and average prices could soon follow.

With home prices already near record highs in the Denton area, affordability will likely be a topic of discussion among council members. It better be, because we’re nearing the end of decade-long rise in asset prices where many people were used to home prices going nowhere but up. The Federal Reserve is now monetarily incontinent as they try to wriggle their way out of the latest everything bubble economy they created. It doesn’t say much for the sustainability of the latest “recovery” if the Fed Funds Rate can’t even rise past 2.5 percent without choking off growth. 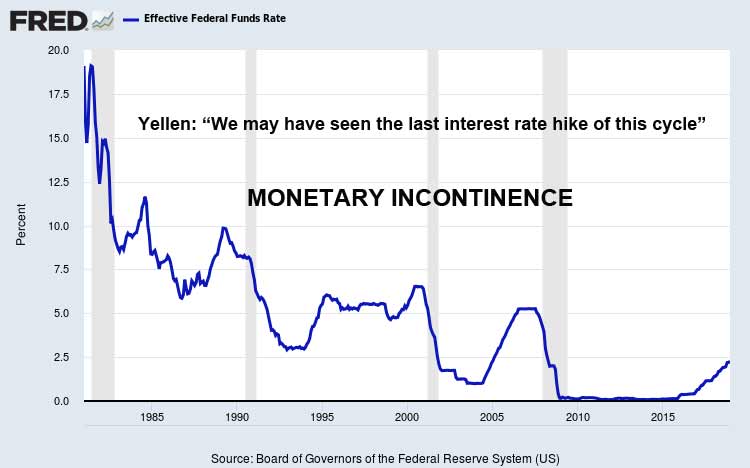