Denton County home sales continued their slide in December as the Dallas-Fort Worth real estate market saw a 5th consecutive month of year-over-year declining sales activity. Denton County experienced an 11 percent decline in closed home sales along with a corresponding 11 percent decline in pending home sales activity. The drop in forward-looking contract activity suggests that a spring housing rebound may be a tough proposition.

Home prices were still rising in many DFW submarkets in December, including Denton Texas where the average price of a home rose 11 percent to $274,012. Looking at a broader picture, Denton County did not fare so well with the average price of a home falling 3.1 percent to $347,050. As the local housing market correction begins to take shape, more submarkets are posting lower year-over-year average prices. The average home price in Frisco TX plunged 12 percent compared to the same time a year ago as sales tanked roughly 20 percent. Dallas home prices declined 3.5 percent in December with a 13 percent decline in pending sales contracts.

More affordable markets like Denton Texas and Fort Worth Texas are holding up better with continued home price increases and better sales activity than the general DFW area. This should not be surprising. As the housing market begins to correct with the removal of the Federal Reserve’s years of artificial stimulus (QE), end-user shelter and affordability are the primary concerns for home buyers. Luxury homes, flipping and general speculation are dying on the vine with each passing month that the Fed unwinds its massive balance sheet.

The new waffler in chief at the Federal Reserve has taken note that his previously rosy projections for continued economic growth may not come to fruition after a spectacular December swoon in the markets. As yours truly predicted would happen, Fed chair, Jerome Powell, caved in short order and dangled a carrot last week that the Fed’s balance sheet normalization may not be on auto-pilot after all.

The one thing he did do he should have done after last FOMC meeting was convey that the Fed would truly be data dependent going forward. “Gradual” needs to go

For better or worse, the housing market is now tied the the financial markets, part of the speculative everything bubble that the Federal Reserve is attempting to guide to a soft landing. After spending the better part of a decade reflating asset prices across the spectrum and facilitating a huge increase in system-wide debt, this is going to be a difficult proposition.

What many, if not most, of the real estate pundits in the Dallas-Fort Worth area continue to dismiss is the overwhelming evidence that the economic boom we have experienced was built on the back of central bank intervention. That is the ugly, undeniable truth that few people want to discuss. It’s not just Dallas-Fort Worth that is seeing a housing market correction take shape. Housing market bubbles are being exposed in Silicon Valley, Seattle, Denver, Canada and many more places yet to be discovered. Vancouver just wiped out nearly two years of price gains.

The good news is that solid job growth continues to provide support to the local housing market. Texas is still one of the top destinations for relocation due to its relatively healthy economy. If the employment engine in the DFW area remains intact, the local housing market correction could be subdued. This is assuming we don’t see an economic “accident”. Even if we avoid a major market-disrupting event there will likely be more volatility in the housing market as the Federal Reserve attempts to extricate itself from yet another set of policy failures and the massive debt in the financial system it directly fostered.

Home sales continue their downward trend in Denton, though the slide is not as severe as some DFW areas… 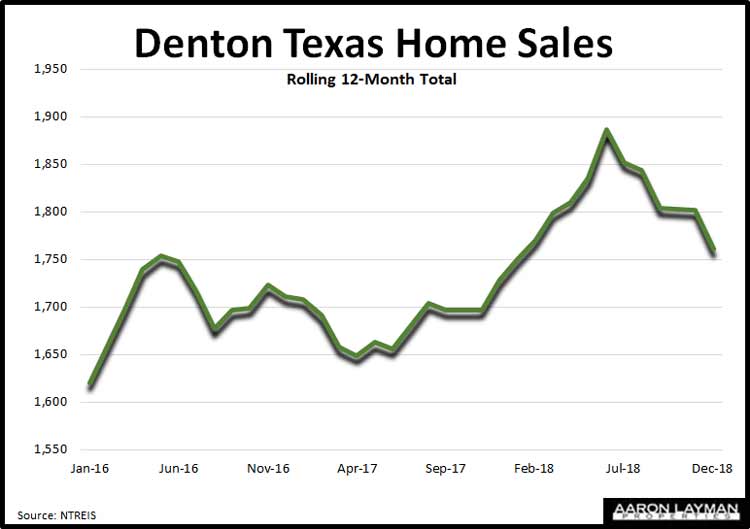 Home prices in Denton are still climbing…from a much lower base than the DFW average. 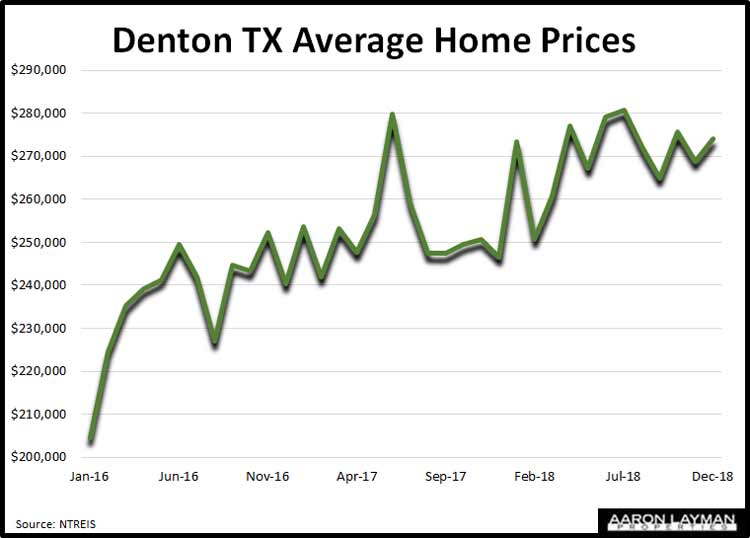 Inventory levels in Denton are much lower than the DFW average… 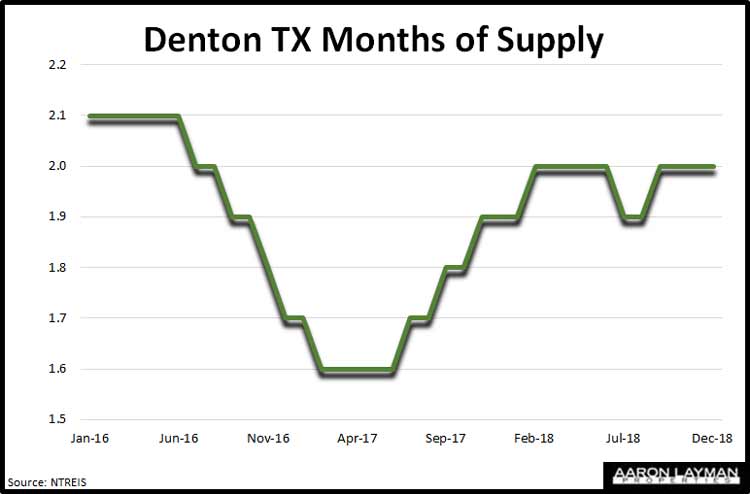