The Census Bureau reported new home sales for September at a seasonally adjusted annual rate (SAAR) of 701,000 in September. This was in line with expectations, although the August figure was revised down slightly. The September print for new home sales translates into a 15.5 percent increase from the same time last year. As a reminder, mortgage interest rates were over 100 basis points higher last year. This helped to drive new home contract activity in September. This made for a really easy year-over-year comparison.

Another thing that contributed to September sales of new construction was the huge 8.8 percent decline in median new home prices. According to Census figures, the median price of a new home contracted in September was $299,400, the lowest print during the past year. The average price of a new home also fell 6.1 percent, coming in at $362,700. This was near the lows for the year.

The supply of new homes dropped 14.1 percent from a year ago to 5.5 months. It would appear new home builders are still working off some of the their inventory, while remaining cautious about speculative construction.

The Census figures for September seem to be in line with what we saw in the Dallas-Fort Worth real estate market last month. Closed sales of new construction jumped 18 percent in the DFW area, while pending sales shot up 27 percent. The median price of a new home in North Texas was roughly $325,000 while average price of new construction was $379,000. Those figures represent increases of 1.5% and 3.2% respectively. New home prices in the Dallas-Fort Worth area have been trending downward for the last two years, looking at the 12-month rolling average of prices. 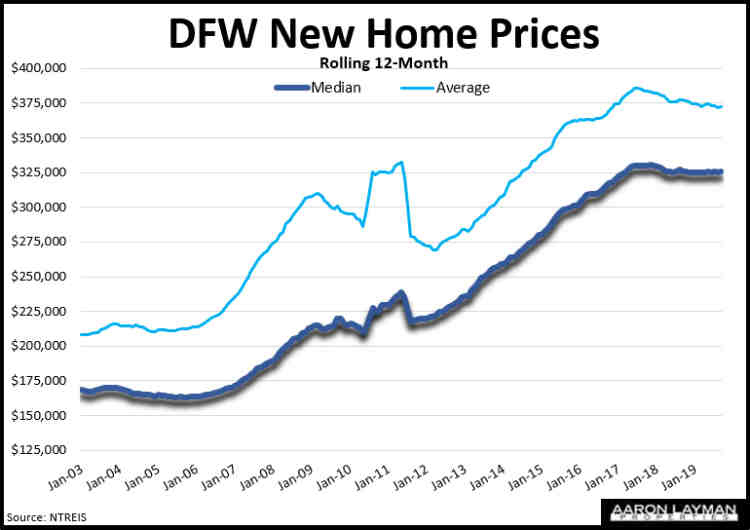 For the North Texas new home market, super low mortgage rates have been the secret sauce this year. Hopefully we will be able to finish the year on a positive note with continued low rates. One thing is for sure. Any significant rise in mortgage rates at this stage of the economic cycle is going to be met with unpleasant results.

It is interesting to see median new home prices still trending down after the November 2017 peak, in spite of the recent plunge in mortgage interest rates. 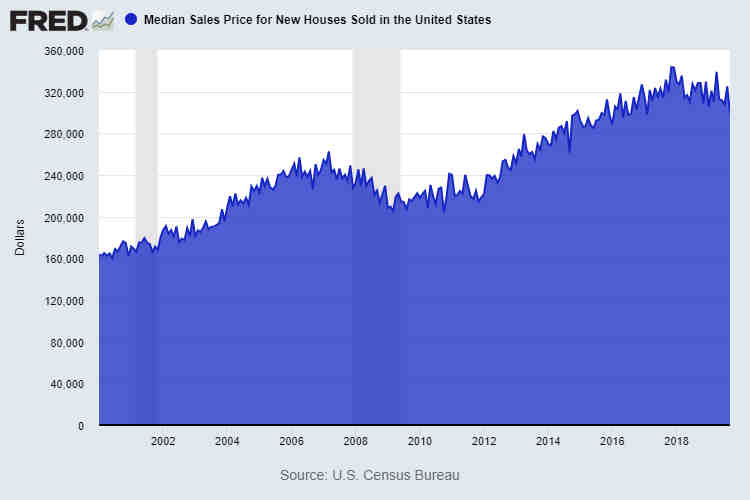 As a reminder, Census counts a new home “sale” at the time of contract signing. Census figures do not represent actual closings.