Texas Realtors are paying for some bad economic research. That’s the only conclusion I can come to after looking at the current situation where highly educated economists are giving short shrift to the underlying causes of Texas home price inflation and market distortions. While the Fed has abdicated its responsibility to the American public, TAMU economists seem to be cooperating with the Fed in offering “alternative facts” surrounding the declining affordability of housing and real estate market imbalances.

In a previous post I posited a guess as to why this is happening. After looking at the most recent annual reports from the Texas Real Estate Commission and where our real estate licensing fees go, I’m even more convinced that Texas Realtors are unwittingly funding some junk research at the Texas A&M Real Estate Center.

We can begin by analyzing the 2015 and 2016 fiscal year annual reports for the Texas Real Estate Commission (TREC). Data for the last two years show that revenue collected from licensing and permits jumped from $16,821,524 in 2015 to $20,161,316 last year. That is a significant increase, and somewhat understandable considering the growth in total membership which stood at 171,554 (140,958 active) Texas brokers and sales agents in December 2016.

Something that also increased significantly from fiscal year 2015 to 2016 was the amount of license revenue that went to TAMU per the state-mandated charter. This arrangement is mentioned in the 45-year history of the Real Estate Center. On page 26 of the FY 2016 report for TREC you will find revenues for TAMU. This section of the report notes revenue for licenses, fees and permits of $5,507,820 going to TAMU, or roughly 27 percent of the total license revenue noted on page three. I spoke with Melissa Huerta, a special projects accountant at TREC, and she confirmed that a big chunk of Realtor license renewal fees are going to fund TAMU. $40 of each salesperson renewal and $140 of each broker license renewal is going to the Texas A&M Real Estate Center.

I think most Realtors would agree that the Real Estate Center at A&M provides some valuable research. Unfortunately, I think Texas real estate practitioners are getting short-changed in terms of the quality of economic analysis in recent years. I suspect this could have something to do with that new era of “cooperation” between the Real Estate Center and the Fed that apparently began in 2012 (see page 27 of the 45-year history). Apparently cooperation means offering up rational observations of markets while omitting many of the uncomfortable truths easily visible in the data.

I don’t mind paying for solid research, but it appears Real Estate Center economists are giving the Federal Reserve a free pass on the damage they have inflicted within the Texas housing market. That is an utter travesty, because the Fed’s credibility trap is significant. Any professional economist should be able to see that the Federal Reserve is culpable for some of the problems in the housing market. I can think of artificially low inventory, high prices and diminished affordability for starters. Surprisingly, I don’t ever see the Fed listed as a cause for any of these things in recent REC research pieces. That begs the question of why?

Read the Dallas Fed’s look on the lack of affordable housing in Texas. Publicly they seem to be concerned about the housing affordability problem, yet you don’t see any charts like this clearly demonstrating that the Fed facilitated an echo-bubble in Texas home prices, back to levels that are again unaffordable for many Texas families. 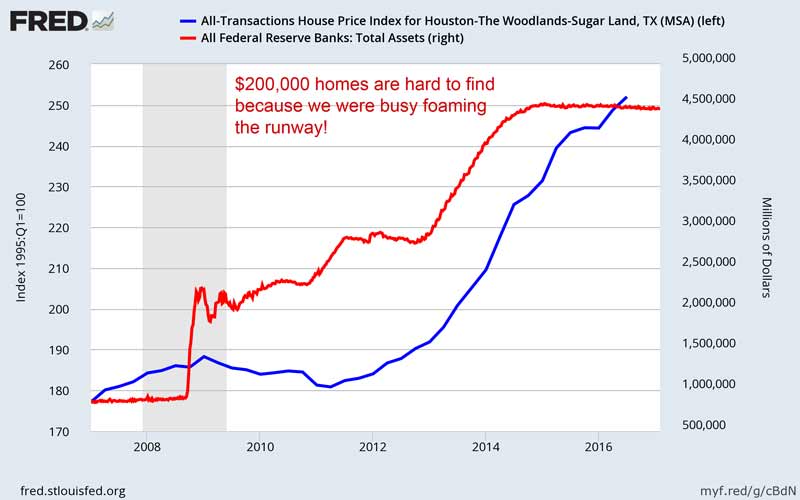 All we get is this hilarious spin on page 8.

“While little can be done about escalating housing and land prices in Texas, respondents point to greater public support of affordable-housing initiatives and regulatory modifications as possible immediate remedies to the problem of too little affordable housing.”

You don’t see TAMU economists explaining how the Federal Reserve became a mortgage bond whale as they were driving rates into the basement and causing more home price inflation. 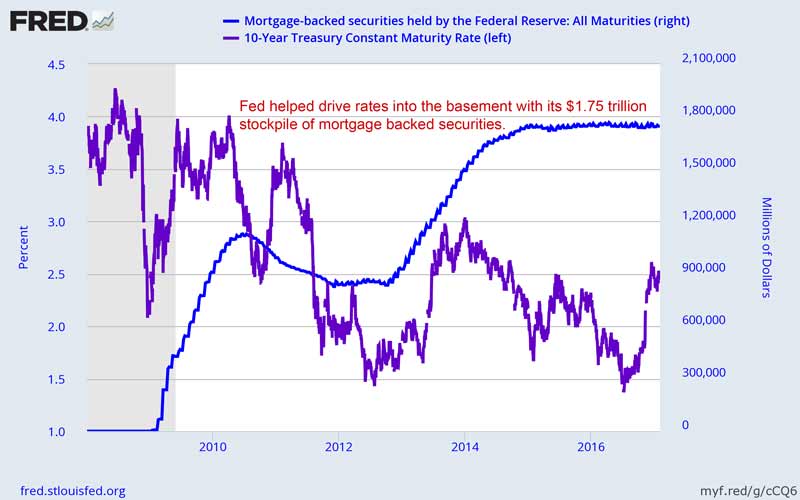 Any rational person knows there is plenty that can be done. A good starting point would include providing an honest accounting to the public of what went down during the latest “recovery” where the Fed greased the wheel for financial parasites in a trickle-down feeding frenzy. Any honest accounting to the public would require TAMU economists to explain the Fed’s involvement in the diminished affordability of Texas housing rather than dancing around the subject.

It was an obvious policy choice of the U.S. government to re-capitalize the banks and many of the same executives who caused the last housing crash. It was an obvious choice of the government to then bury the fraud and whitewash the abuses in a bogus settlement that held none of the bank executives personally accountable for their sins, while millions of Americans lost their homes.

It’s an Orwellian world we live in when supposedly liberal-leaning think tanks cheer the fact that taxpayers are going to be subsidizing billionaire Wall Street landlords and their new single-family rental empires. It defies logic that a TAMU economist who supposedly has “invaluable” insight into monetary policy can’t seem to bring himself to mention the fact that the Federal Reserve has been partially responsible for the inflation of Texas home prices, as well as the increase in wealth inequality in Texas and across the U.S.

It’s bad enough that the Federal Reserve was bailing out foreign banks, as well as many of the largest corporations and financial institutions in the U.S. during the last crisis. By default they were also bailing out the executives who caused the housing crash in the first place through their various control frauds and excessive greed. It’s deplorable that Federal Reserve bankers mocked poor unemployed Americans behind closed doors. It’s laughable that the Fed was given any responsibility for regulating our too-big-to fail financial institutions because it’s blatantly obvious the Fed has a conflict of interest.

That begs the question of why TAMU would even entertain the thought of “cooperation” with an institution mired in a credibility trap? The Fed already has an army of lapdog economists willing to do their bidding. Texas Realtors should not be contributing to the Fed’s warped view of economic reality which encourages the misallocation of capital and Ponzi finance. Access to affordable housing is not a game, so it would be nice if TAMU economists would be more objective about the causes of diminished affordability of Texas homes.

I’m not a PhD, but I understand finance and economics. If TAMU economists wanted a professional opinion outside of the Newspeak of the Fed, they would be wise to contact someone like Danielle DiMartino Booth. Texas Realtors deserve better research if they are going to be footing the bill, and Texas citizens deserve to know what’s really driving their housing markets. As the nation’s largest publicly funded organization devoted to real estate research, the Real Estate Center at A&M has an obligation to provide honest, objective research that is not tainted by the Fed’s captured culture.

“The culture at the Fed–and its leadership–were not just ignorant of the brewing financial crisis, but indifferent to its very possibility. They interpreted their job of keeping the economy going to mean keeping Wall Street afloat at the expense of the American taxpayer. But bad Fed policy created unaffordable housing, skewed incentives, rampant corporate financial engineering, stagnant wages, an exodus from the labor force, and skyrocketing student debt.” Fed Up: An Insider’s Take on Why the Federal Reserve is Bad for America – Danielle DiMartino Booth

“House prices have risen by nearly 25 percent over the past two years. Although speculative activity has increased in some areas, at a national level these price increases largely reflect strong economic fundamentals.” Ben Bernanke – Former Chaiman of the Federal Reserve, Oct 20, 2005

“Thus did a handful of rapacious citizens come to control all that was worth controlling in America. Thus was the savage and stupid and entirely inappropriate and unnecessary and humorless American class system created. Honest, industrious, peaceful citizens were classed as bloodsuckers, if they asked to be paid a living wage. And they saw that praise was reserved henceforth for those who devised means of getting paid enormously for committing crimes.” Kurt Vonnegut

Humans are prone to memory lapse. Here is reminder that many of those economic “experts” are anything but.