The Census Bureau reported new home sales for August at a seasonally adjusted annual rate (SAAR) of 713,000 for August, This was above expectations and sales for July were revised upward as well. The median price of a new home contracted in August was $328,400, while the average price of a new home shot up to $404,200. Lower rates obviously spurred more borrowers to open up their checkbooks in August. Months of supply for new homes stood at 5.5 in August, down almost 13 percent from the 6.3 months of supply seen last year. As I have noted, home builders have been working off existing home inventory with the opportunity which has been gifted to them.

Dallas-Fort Worth saw new home sales in line with these recent Census figures. Sales of new construction in DFW were up 8 percent in the DFW area while pending sales for new construction rose 18 percent. As a reminder, Census counts a new home sale at the time of contract signing, not at closing. The more accurate comparison for local new home sales would be the pending sales index. The new home market has continued to recover in the Dallas-Fort Worth area during the last few years. 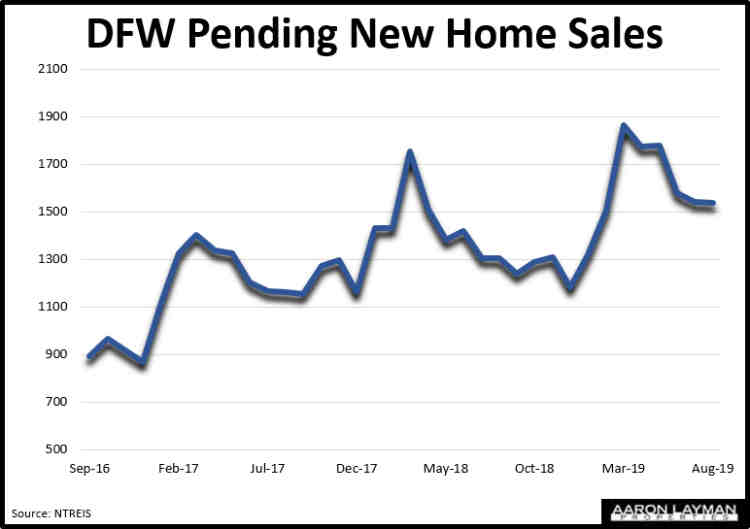 While DFW’s new home sales growth is impressive, it’s also interesting to note that new home sales have yet to eclipse the previous bubble peak leading to the Great Recession. More than a decade later, DFW is much larger in terms of population, but new home sales still have not matched the March 2006 record in the pending sales index. The record for DFW new home sale closings was also March of 2006. 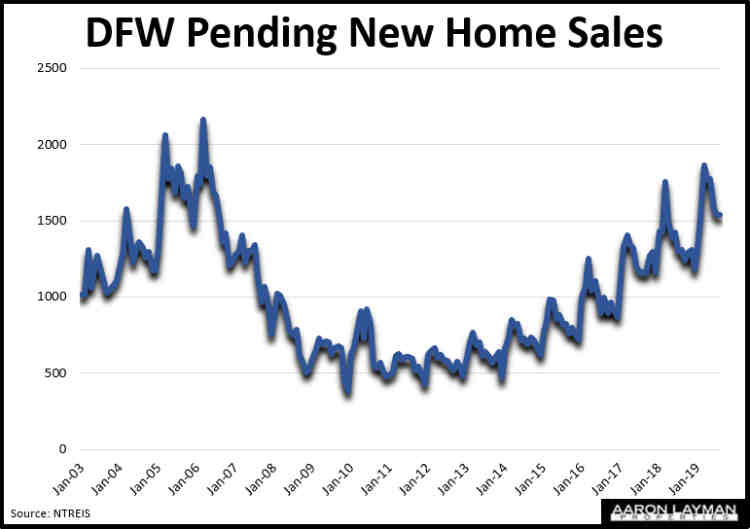 The previous housing boom was driven by epic fraud in the mortgage market, and particularly the securitization of fraudulent mortgages which had no chance of ever getting paid in full. The latest boom in the DFW new home market has been driven by economic growth and the Federal Reserve’s interventions in the markets to re-inflate asset prices.

The big dive in mortgage rates has been a savior for the new home market this year, but that doesn’t mean the sales growth will continue. Existing home sales continue to tread water, and home price growth continues to slow. The growth narrative for the housing market depends on continually lower interest rates, and August was apparently the end of the line for the time being.