The Real Estate Center at Texas A&M is apparently still phoning it in when it comes to DFW area home sales estimates. I was hoping the A&M RECenter had fixed their algorithm for late closings to produce better monthly sales estimates for the local real estate boards. Unfortunately, there is still a lot of room for improvement. Dallas’ largest paper reported a rise of 5 percent for single-family home sales in August. Updated NTREIS data show the actual sales increase was about 1 percent. The Pending sales increase also looks to be about 1 percent for August.

Missing your sales estimates by a percentage point or two is perfectly reasonable. If you are missing by more than that, it’s time to get the formula reworked or simply delay the reporting date to more accurately reflect the actual data on closings. Unfortunately facts seem to be of little concern these days, as truth decay presents in multiple forms.

If you are trying to gauge the local housing market in some of the smaller communities in Denton County, the press releases produced by the Texas A&M Real Estate Center and their “Data Relevance Project” could leave you delirious. To say that the sales estimates for Denton County cities are bad would be a mild understatement. They are a comical joke in many instances. I’m surprised the Greater Denton Wise County Association of Realtors would even link to them on their website. Then again, Dallas’ largest newspaper has apparently been regurgitating the A&M-produced press release numbers without question for years.

I compiled this table of the August sales estimates for various Denton County communities and compared it to the actual closings reflected in the NTREIS system today. As you can see, the errors in the sales estimates are significant. You might be able to excuse a large miss in a really small market with only a couple of sales, but the discrepancies are across the board, including communities like Little Elm with sizable pool of sales. 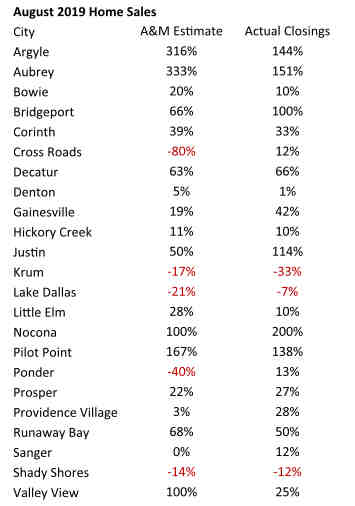 I should point out that the hard numbers for Little Elm, for instance, bear little resemblance to the actual NTREIS sales data at all. I’m not sure what’s going on there. The GDWCAR/A&M press release for August indicates 68 sales in Little Elm Texas. The actual number of closings in Little Elm was 144 according to today’s updated figures.

The takeaway here, is that if you want accurate numbers on local home sales, numbers that you can use to gauge the strength or direction of the local housing market, the statistical estimates from the Texas A&M RECenter are the last place I would look.