Fed Looks At Texas’ Affordable Housing Problem, Fails To Look In The Mirror

Home/Fed Looks At Texas’ Affordable Housing Problem, Fails To Look In The Mirror
Previous Next

Fed Looks At Texas’ Affordable Housing Problem, Fails To Look In The Mirror

The Federal Reserve can be commended on one thing. They never cease to provide entertainment in terms of their complete ineptitude and functional obsolescence. The Fed continues to show no remorse for the damage they have inflicted on the general population and their destruction of what was formerly known as the U.S. housing market. The latest comedy from the Fed comes courtesy of the inaugural report from the Dallas Federal Reserve Community Outlook Series titled ‘The Scarcity of Texas Affordable Housing’ In this fun-filled trip down the rabbit hole, the Fed examines the problem of the lack of affordable housing in Texas, and not surprisingly, comes up with numerous solutions that have nothing to do with the real problem. The real problem of course is that the Fed is part and parcel responsible for the lack of affordable housing all across the country due to the Fed’s failed trickle-down monetary experiment. This manipulation and serial mismanagement of the economy has only exacerbated wealth and income inequality in America as house price inflation outpaced wage growth.

True to form, the Fed starts the failed experiment of analyzing the causes of affordable housing in Texas by asking the wrong people. Instead of asking prospective end-user buyers and renters, the Fed surveyed developers and conducted “in depth” interviews. This is the perfect way to get the wrong answers to the problem, but it probably eliminated what would have been some seriously entertaining and more truthful responses that could have come from the general public.

Another hilarious failure of the report is contained in the section on property taxes. The Dallas Fed is apparently oblivious to the runaway residential property taxes throughout the state or the nature of our two-tiered, operationally corrupt property tax system. No surprise here because they were asking the wrong people (millionaires, or possibly billionaires) the wrong questions. This tidbit from the report shows you how clueless the Fed is…

“Median property taxes by county do seem to correspond with feedback from surveyed developers: Brazos, El Paso, Harris, Hidalgo and Midland counties all report median real estate taxes of $1,500 or more (Chart 6). The Dallas–Fort Worth and Austin–Round Rock metropolitan statistical areas (MSAs) also have high median taxes, but developers in those areas were not as likely to point to property taxes as a substantial barrier. However, housing prices in those cities are higher on average; the effective property tax rate—defined as the property tax paid divided by the value of the home, which is not reported here—is potentially lower. “

What the Fed fails to take into account is that these developers aren’t holding the bag when the properties are sold to the end-user and the local CAD subsequently jacks the valuation, and thereby the real property taxes, to the stratosphere. Thus, according to the Fed, property taxes are only a moderate concern. LOL!

“While little can be done about escalating housing and land prices in Texas, respondents point to greater public support of affordable-housing initiatives and regulatory modifications as possible immediate remedies to the problem of too little affordable housing.”

Oh really??? So after QE1, 2 and 3, a bloated balance sheet that still sits at roughly $4.45 trillion, and zero-bound rates for half of the last decade, all part of the charade of a “recovery” as Wall Street gorged on virtually free money (gobbling up large swaths of affordable property as the original owners were foreclosed and evicted) and our largest banks continued with serial criminal activity while the Fed ignored it’s role as a regulator of the banking system ,you are telling us there is little that can be done? Thanks for the tip, but a growing percentage of the American public knows differently.

I should clarify that the report wasn’t a complete waste. For those in the Houston area, there are some useful data points from the Gulf Coast region analysis:

Don’t ask the Fed to really address what caused the affordable housing problem in Texas, because that would require some serious self-reflection… 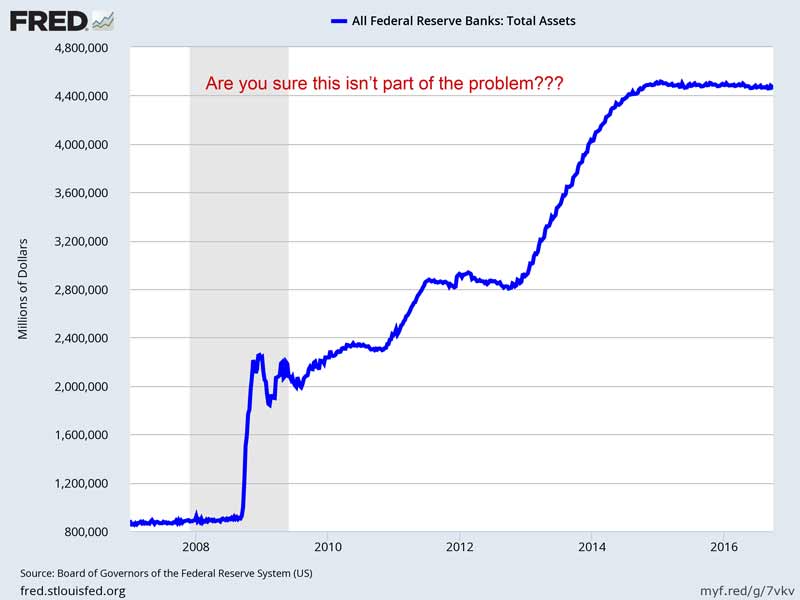 The more I think about it, the more the Federal Reserve reminds me of your local central appraisal district. Both institutions do a pretty poor job of their advertised objective and both have outlived their useful purpose. This should not be surprising because both are riddled with conflicts of interest and operational corruption. Our central appraisal districts in Texas advertise the ruse of uniform and equal appraisal even though their actual structure prevents it from happening. You can’t have accurate appraisals on commercial properties if you only have access to a fraction of the actual sales price data. The Federal Reserve tells us its policies center on stable prices and maximum employment, yet their policies produce exactly the opposite. The Fed is apparently blind to the consequences of their own failed policies and the altered state that is the American housing market.

If you truly want affordable housing in Texas, you would first need to assess the real root causes. A more accurate accounting of the problem is contained in Chris Martenson’s piece ‘Sorry Losers – How the Fed has screwed the many to benefit the few’ You may also want to read another laugher about how the Fed is supposedly concerned about Texas’ need to invest in education while they are busy shoveling billions in interest payments to member banks. (a direct result of the Fed’s bloated balance sheet and the excess reserves created. Excess reserves still exceed $2.24 trillion!) 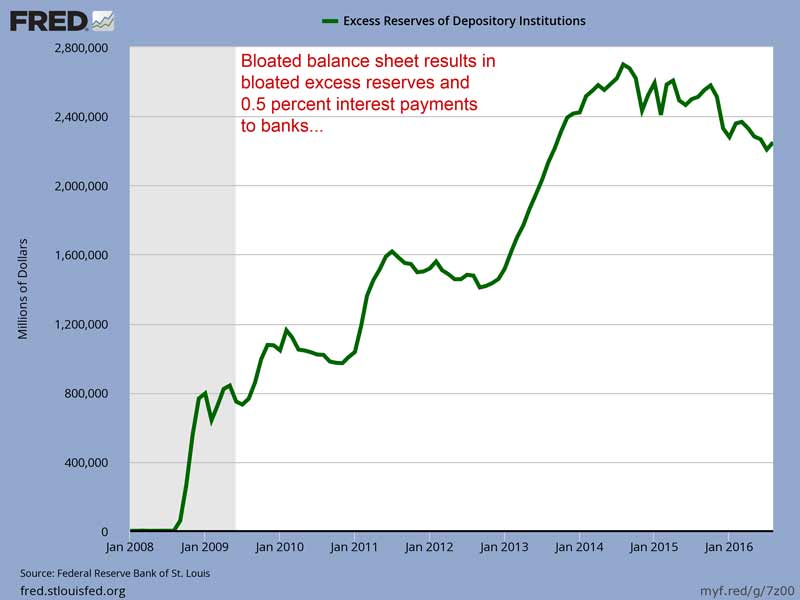 The unfortunate reality is that the Fed is neither apolitical or “independent”. It is a creature of Congress that has morphed into a parasite on the real economy and a tool for self-enrichment for bankers and the politically well-connected. If we really want affordable housing in Texas, there is actually a LOT we can do to achieve that goal. Eliminating, or greatly diminishing, the Fed’s role in what should be a free market capitalist (as opposed to crony capitalist) system where there is real price discovery on assets like land and homes would be a great start.

“Central banks are never independent, they’re only varying degrees of dependent on the public’s trust.”