The Census Bureau numbers for October new home sales posted at a seasonally adjusted annual rate (SAAR) of 544,000 units. This was way below expectations of a 575,000 print, and near a three-year low. As I have been detailing for much of the year, much of that “pent-up demand” that you hear real estate industry mouthpieces talking about is a giant work of fiction, a tired marketing ploy that the media, economists and Realtors have been using in attempt to justify grossly inflated home prices across the U.S.

Well, it appears the cat is officially out of the bag with the release of October home sales. While the previous months sales were revised higher, the miserable October print just corroborates my thesis that the Fed’s asset-bubble unwind is just getting started. There are plenty of other consequences in the pipeline. It’s important to remember that the housing market, thanks to the Federal Reserve’s failed policies, is more intricately tied to the financial markets than ever before. This was the Faustian bargain that Obama and the Fed made when they decided to bail out every Wall Street institution under the sun at the expense of American taxpayers, including the ones running obvious accounting control frauds. Of course the millions of homeowners who lost their homes to foreclosures (many of those executed in kangaroo courts with fraudulent robosigned documents) were deemed acceptable collateral damage to save the “system”.

The ultimate con was of course advertised as a salvation of the economy. In reality it just delayed the eventual reset with a new pile of debt that is larger than ever and spread among multiple asset classes rather than just housing. The big problem, one that the Fed’s economists remain willfully ignorant of, is the unfortunate reality that all of this speculative debt is more interest-rate sensitive than they would have you believe. The new home sales market is exposing this unfortunate dilemma very clearly.

According to Census numbers, new home sales in October collapsed 12 percent from the same time last year. Sales were down 8.9 percent from the revised September print. The median price of a new home contracted in October was 309,700, down $9800 or 3 percent. The average price of a new home contracted in October came in at $395,000, up $1,000 from October of last year. The supply of new homes for sale in October rose to 7.4 months, a 32 percent jump from October of last year! So if prices fell three percent and supply jumped higher, why the big collapse in sales? Can you spell “housing market bubble”. Aside from the swoon in the stock market during October, the other key ingredient for deflating an asset bubble was also present, as interest rates hit a multi-year high. We now have a good idea of what the breaking point for the housing market is, and it’s a lower threshold than many in the media were/are willing to admit. This is the result of years of rampant artificial asset price inflation courtesy of the Federal Reserve. 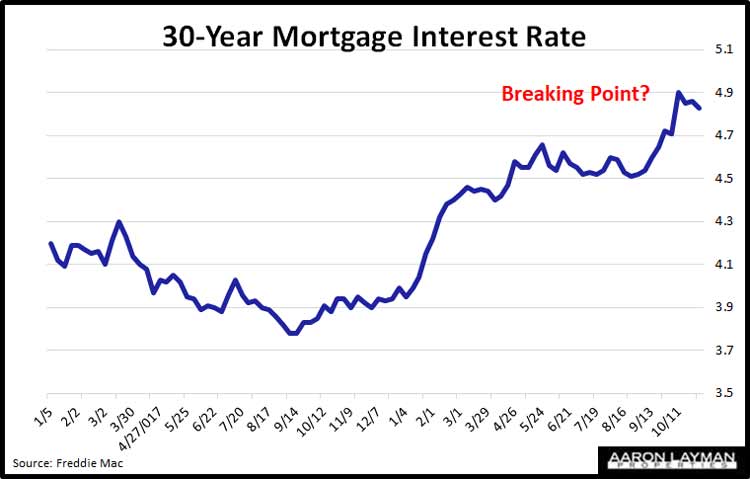 The swoon in new home sales is simply the reflection of moral hazard coming home to roost. While the media, the Fed and its army of economists have continued to tout the amazing bull market “recovery”, the sand (debt) upon which it was built is now shifting. That carefully crafted narrative that we have been spoon-fed for the last several years is looking more tenuous by the day.

Updated: After comments from Fed Chair Jerome Powell were interpreted as a dovish sign that the Fed might potentially halt future interest rate hikes, the markets went on a panic buying spree. Before Powell’s comments, homebuilder stocks were tanking today. They ended the day in the green thanks to some soothing central banker talk on “financial stability” and a decline in bond yields. The carnival show continues, but one thing that should be perfectly clear at this point is that the only thing that will save the housing market is lower interest rates, lower prices or a combination of both.

This is why Wall Street, the president, and the real estate industry are all now desperately hoping that real market forces are interrupted once again so Wall Street can blow the bubbles even larger. It is not surprising that Powell caved (at least verbally) just after he was touting the fabulous economy during his Dallas speech. At the end of the day the Fed will do what they do best…cover their own asses and the interests of their real constituents.

“No, make no mistake, this was all well crafted, timed and executed.” Sven Henrich – ‘Caved’

“As markets have grown to recognize how quick the Federal Reserve is to bail out institutions (and executives) in trouble, they naturally respond.” Simon Johnson ‘Economic Donkeys’ – 2009

“It’s difficult to get a man to understand something, when his salary depends upon his not understanding it.” Upton Sinclair