Home/Hoisington Quarterly Review: Parallels of Past Fed Mistakes
Previous Next

Hoisington Investment Management has released their latest Quarterly Review, and it’s certainly worth a read if you want to understand the Federal Reserve’s capitulation on policy normalization and the stagnating global economy. The global economic slowdown should really not be surprising considering the massive amounts of stimulus by global central banks which have resulted in massive amounts of debt and economic bifurcation.

The problem with quantitative easing and all of the central bank intervention is that liquidity has not not been used for productive, organic growth. As the debt keeps piling up, the economic benefit of the rising debt levels continues to shrink. This is the law of diminishing returns in action. With both fiscal and monetary policy contributing to massive government debt overhangs, GDP growth continues to lag historical norms.

The Federal Reserve and their team of economic quacks continue to pursue an arbitrary inflation target, focusing on an unreliable (if not discredited) model in the Philips curve. FOMC officials talk about “neutral interest rates” when no such official measure exists. We are apparently doomed to repeat the mistakes of the past while a more reliable equation of exchange (M2*V=GDP) is readily available from economist Irving Fisher.

The U.S. is looking more and more like Japan. With the Fed monetizing debt and the current administration showing absolutely no fiscal restraint whatsoever, organic economic growth will be difficult to achieve. And no, MMT is not going to save us from fiscal insanity. Dr. Hunt offers a succinct, but eloquent explanation of why Modern Monetary Theory is not a feasible solution to our economic issues, unless you are a fan of runaway inflation and a destabilization of the entire global economy.

When the next recession arrives, and sooner or later it will, QE4 looks to be the likely response from our monitarily incontinent central bank. Like Japan, it appears that government and central bank officials are going to pull out all the financial tricks imaginable to avoid a hard reset of the system, making a mockery of the real economy in the process.

With the U.S. government currently running annual deficits of a $trillion or more in what is supposedly considered a healthy economy, it doesn’t take a rocket scientist to understand that more debt will be monetized by the Federal Reserve in the next downturn. The budget deficit is growing much quicker than the current administration is willing to discuss. This should come as no surprise because trickle-down fiscal policy never works. The giant tax cut for Wall Street was a massive con job, so now Trump is looking to the Federal Reserve for cover. Jerome Powell has demonstrated is he going to toe the line.  It’s what central bankers do. They have to at least pretend they are doing something useful, so they will throw gasoline into the flames of capital misallocation. 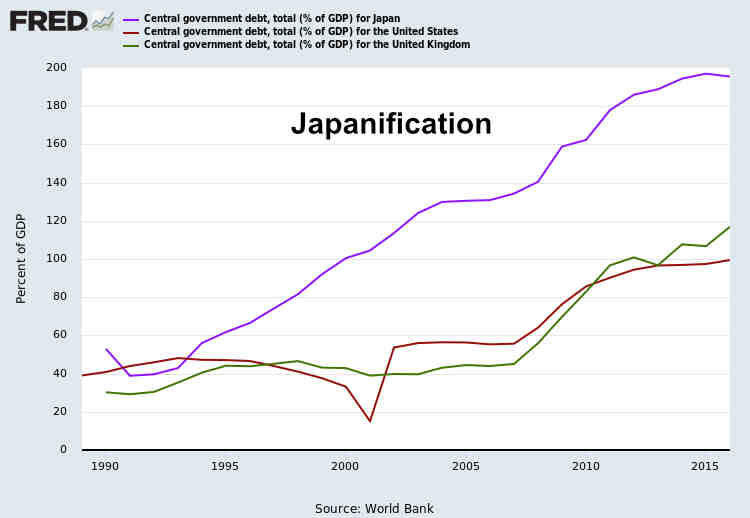