The Texas unemployment rate hit a fresh low in the month of June, with the official headline number falling to 3.4 percent. According to the Texas Workforce Commission Texas added 45,000 jobs during the month and 315,600 jobs over the latest 12 month period. Dallas-Fort Worth posted an unemployment rate of 3.3 percent, down from 3.8 percent a year ago. The news from the TWC is that Texas continues to be a beneficiary of the longest economic expansion in U.S. history, and the DFW area has certainly been a part of that expansion.

Denton County did its part, adding additional jobs during the month of June. Employment growth in Denton County appears to be heading steadily higher. The City of Denton has experienced some hiccups this year, and that could be something to watch with the economic cycle fast approaching the end of the road. Try as they might, the masters of trickle-down monetary mayhem have not eliminated natural business cycles. Quite the contrary. The hypocrites and egomaniacs in the Marriner Eccles building have only added fuel to the fire to be burned in the next recession.

There are couple of areas for concern when it comes to employment in the Denton area. The Golden Triangle (or Bermuda Triangle as I like to refer to it) Mall is one of them. J.C. Penny on Friday announced that it had hired restructuring advisors. In Layman’s terms, that means a forthcoming bankruptcy filing. Absent a spectacular Hail Mary debt restructuring agreement with its creditors, J.C. Penny is not long with this world. That would leave Denton’s mall with another empty anchor tenant space, after Sears recently went belly up.

A second area of concern for Denton, would be one of its largest employers, Sally Beauty Supply. The stock of Sally Beauty Holdings recently dipped to a 9 year low after Amazon announced it will open up its own business aimed at the professional stylist market. The good news for Sally Beauty is that they should be able to coexist with Amazon, and it appears regulators are finally waking up to the reality that our giant tech monopolies are counterproductive to economic growth. It is well past time for Amazon to be broken up, something the next administration will be forced to acknowledge.

The larger concern going forward will continue to be waning economic growth as we approach the next recession. We are still supposedly in an economic expansion, yet area home sales are once again rolling over with mortgage interest rates below 4 percent. Home builder stocks have also been taking note of this reality during the last month. As we continue to pile on more and more debt, it takes more and more stimulus to achieve the same level of growth. Last month home sales in the Denton area resumed their declining trend, dropping 6 percent, while sales in DFW slipped back into negative territory on a year-to-date basis. That is definitely a cause for concern given the extremely favorable interest rate comparisons to a year ago.

The DFW area continues to outperform the state average in terms of average hourly earnings, but wages have remained relatively flat despite rampant home price inflation in the Dallas-Fort Worth area. Dallas recently overtook Austin as the highest paid metro area in Texas with real private hourly earnings averaging $28.76 per hour. Sounds impressive…until you see this chart. 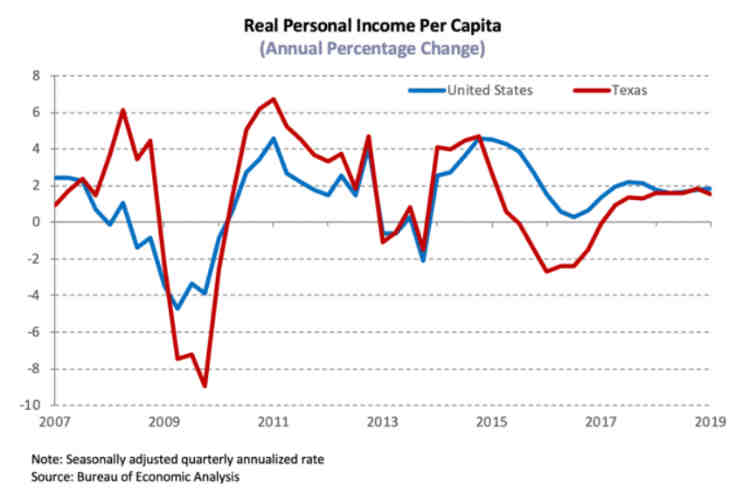 We can be thankful the education sector continues to pick up some of the slack in the Denton area. Both UNT and the local school district are in expansion mode. The Denton Independent School District is doing its part to buffer some of the weakness in the retail employment sector. Next month Denton ISD will be welcoming several hundred new teachers to the district. I am proud to be a sponsor for the upcoming reception for these new employees of the district, as it continues to add campuses and jobs to the area.

We’re going to need some sharp minds to deal with the next recession. Total public debt is now over $22 trillion and total debt within the U.S. economy has grown to $70 trillion. The U.S. economy now depends on ultra low interest rates because decades of fiscal and monetary waste have painted us into a corner. If you are wondering why FOMC officials are already capitulating to interest rate cuts, with unemployment at record lows and the stock market at all time highs, here is your answer… 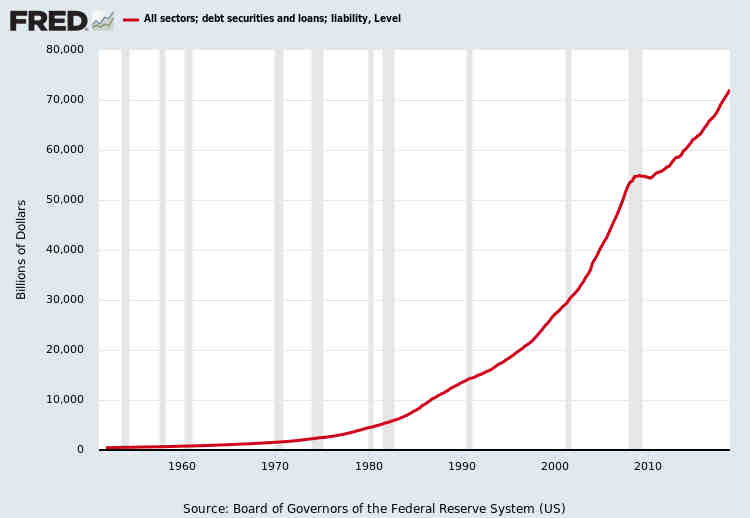