Home/New Home Sales For December Post At 694,000 SAAR
Previous Next

The Census Bureau reported new home sales for December at a seasonally adjusted annual rate (SAAR) of 694,000. This was slightly lower than downwardly-revised November figures, but up 23 percent compared to December 2018 when the markets were sliding off a cliff. The median price of a new house sold in December 2019 was $331,400 while the average sales price was $384,500. Both figures represent slight price increases from last year and noticeable jumps from prices in November. The supply of new homes for sale stood at 5.7 months.

Despite the downward revisions to previous months, this is about what I expected. The Census numbers are prone to large revisions, and it should be expected that December 2019 sales were going to be much better than the same time a year ago. The mortgage rate comparison was very favorable, and don’t forget the Federal Reserve just threw over $400 billion at the markets in additional liquidity.

Earlier this morning we also got a look at D.R. Horton’s latest quarterly numbers. For the latest quarter ending in December, Horton reported a 13 percent increase in closed sales. Horton also reported a 19 percent jump in new home orders with a 22 percent increase in dollar volume of new orders. The solid numbers from America’s largest home builder, based here in North Texas, were in line with other December data.

We may get through the spring before the North Texas real estate market gets another case of indigestion. The Fed tilt has provided a temporary reprieve from a larger correction that appears to be waiting in the wings. We saw the start of it in the fourth quarter of 2018, before the Fed caved on policy normalization. The latest recovery will not last unless the Fed keeps throwing more money at the markets. That’s the nature of a bubble. It takes more and more stimulus to levitate an artificially inflated market.

For better or worse, the Federal Reserve is now intricately tied to the U.S. housing market… 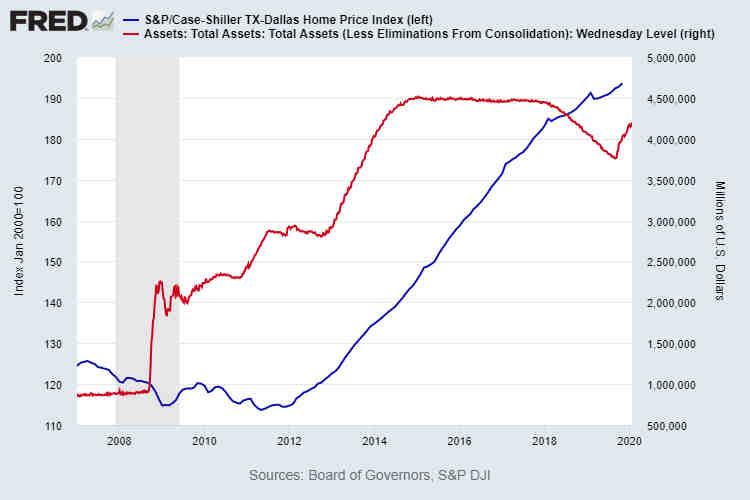