Financialization Of Housing And The Disturbing Gap In New Home Sales

Financialization Of Housing And The Disturbing Gap In New Home Sales

The financialization of the U.S. housing market has led to a rather disturbing gap in new home sales relative to existing home sales. This is a subject I was referencing this week when I mentioned the problem builders are facing with the lack of affordable land to build new homes on.

Today the Census Bureau reported new home sales for January came in at a seasonally adjusted annual rate of 555,000. Previous months were also revised lower, with November taking a significant haircut. On a year-over-year basis January new home sales were up 5.5 percent. That’s not bad considering the circumstances, but it’s also well below the consensus estimates. 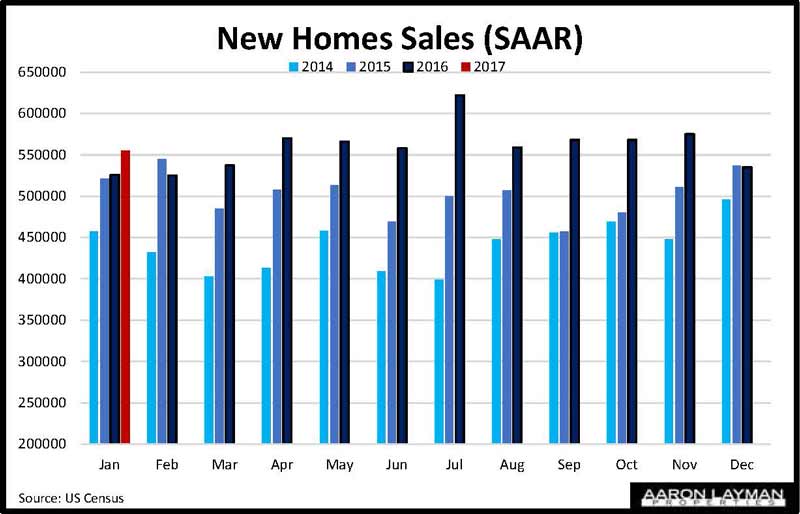 The average price for a new home contracted in January was $360,900 according to Census, about $5,000 less than a year ago. The median price for January new home sales was $312,900, a sharp increase from a year ago. The median increases in home prices (well above the previous bubble-level peak) are a reflection of the persistent and growing inequality in both the economy and the housing market. As more wealthy investors have gobbled up affordable homes for speculation or cash flow, there are fewer and fewer affordable homes available for real owner-occupants to buy. Welcome to the bifurcated housing market.

The tepid growth in new home sales in light of the lower average prices provides more evidence that the housing market is suffering from too much of a good thing in terms of price appreciation. Fewer people can afford the expensive homes available for sale, and builders are feeling the brunt of the interest rate spike more than existing home sellers. Comparing new home sales vs interest rates, you can see the tug of war taking place. 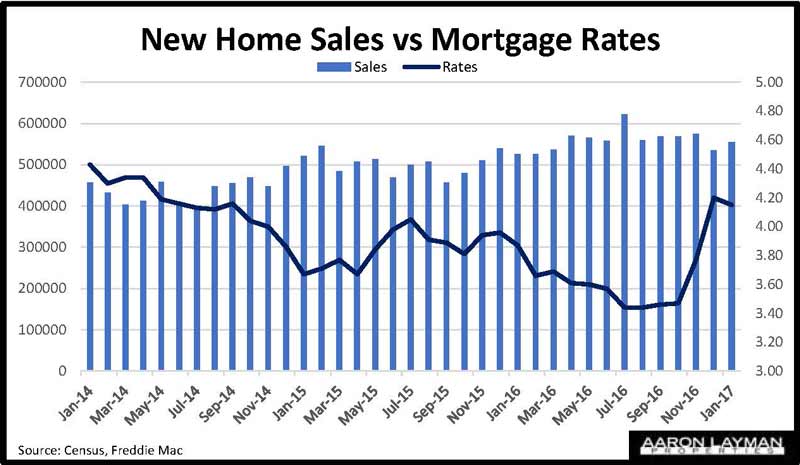 The problems facing the housing market are directly related to the problems with the overall economy. The credibility trap between what government puppets are selling and what real people are experiencing just continues to grow larger. It’s much like that disturbing gap between new and existing home sales that refuses to go away.

It should come as no surprise that we now have a lack of affordable housing in the United States. This was the intent of policy makers in government and the Federal Reserve, to reflate asset prices and protect systemically important constituents. The whole “wealth effect” ruse was simply politically convenient spin for the voting public, because the truth would have endangered the bailouts and the revolving door of cronyism, rot and corruption that now rolls over the Beltway like a dense fog every morning.

After a massive bailout and several years of task forces and committee meetings, U.S. banks are larger than ever, and their criminal enterprise shows no signs of slowing. 7 million people were foreclosed upon, sacrificed at the altar of finance and parasitic capitalism This is the new reality that the Fed hath wrought. This is the new feudal state of America’s real estate market where Blackstone and American Homes 4 Rent each own over 48,000 homes in a private equity rental empire stretching from coast to coast. At the same time you have Silicon Valley employees living out of a van in San Francisco where the median home price has approached $1.3 million.

The Fed, government shills and many in the real estate industry are trying to gaslight us into a recovery, but that “recovery” seems to continually fall short in terms of a broad-based, sustainable prosperity for everyone in the U.S. Wealth and income inequality have only increased as the Fed attempts to jawbone the markets at every noticeable dip.

Gaslighting – a form of manipulation that seeks to sow seeds of doubt in a targeted individual or members of a group, hoping to make targets question their own memory, perception and sanity.”

If you are in the market for a new home, my advice is to tread cautiously. There are deals to be found if you are patient. It’s important to remember that a home is a place to live, not a speculative toy. While the Fed will likely continue to tell you that valuations don’t matter and there is no bubble, you don’t need to be come the next “greater fool”.