“The root cause of the underperforming sales activity in much of the country so far this year continues to be the utter lack of available listings on the market to meet the strong demand for buying a home.”

Of course the real problem is home prices, not a lack of inventory. There are plenty of homes for sale, as anyone with two eyes can show you. The problem is that there are very few affordable homes for sale, homes that your average American family can actually qualify to buy and make the monthly payments on.

Granted, home inventory is near historic lows and April marks the 35th consecutive month of declining home inventory. There is an obvious mismatch between what home buyers want, and what’s available in the market for sale. The “demand” for homes is primarily focused on what people can afford to buy and live in. Unfortunately, the Federal Reserve turned housing into a speculative asset class primarily benefiting the wealthy (aka existing holders of assets). This is the reality of the new housing market, and why there are so few affordable homes to buy.

Local, regional and large Wall Street investors were quick to take advantage of the cheap liquidity from the Fed following the last housing crash. The Fed’s actions, along with those of other major central banks, turned U.S. homes into a financialized asset. The financialization of single-family housing was no accident. It was the direct result of of government and Fed policies designed to cover up the last housing crash. Wall Street’s rental empire was built on the backs of millions of Americans who used to live in owner occupied home.

Real estate pundits, like Redfin’s CEO, continue to pin the blame on zoning and other factors that are inhibiting the construction of new housing. Ultimately it’s the artificial inflation of asset prices (aka real estate, aka real land values) that is constricting the supply of affordable homes, that along with higher construction and labor costs. Home builders have been busy chasing the Fed’s liquidity, in the form of their inflated balance sheet. As a result, there have been very few affordable starter homes constructed in this housing cycle. This is not an accident! It was a foregone conclusion.

Not only did the Fed lock up millions of affordable homes when they bailed out Wall Street, they also turned the focus of builders to more expensive, larger homes that generally have higher profit margins. This is the dirty little secret in the real estate industry that you won’t see discussed in the mainstream media, and certainly not by home builders. Higher prices mean higher profit margins and higher commissions. It’s pretty easy to understand from a Layman’s perspective, yet most Realtors and other pundits won’t talk about it.

The unfortunate truth is that the Fed destroyed housing market fundamentals when they printed trillions in liquidity, helping the previous administration to cover up the last housing crisis. Now the consequences of those policy errors are coming home to roost.

The national mortgage settlement and the actions leading up to it effectively removed millions of affordable homes from the market that would now likely be turning over. On top of that you have the Federal Reserve actively working to inflate the prices of existing and new homes across the country. Now that prices are once again at record levels, (levels which are essentially unaffordable for many families) the Federal Reserve is suddenly concerned about normalizing interest rates and their massive balance sheet. Go figure! 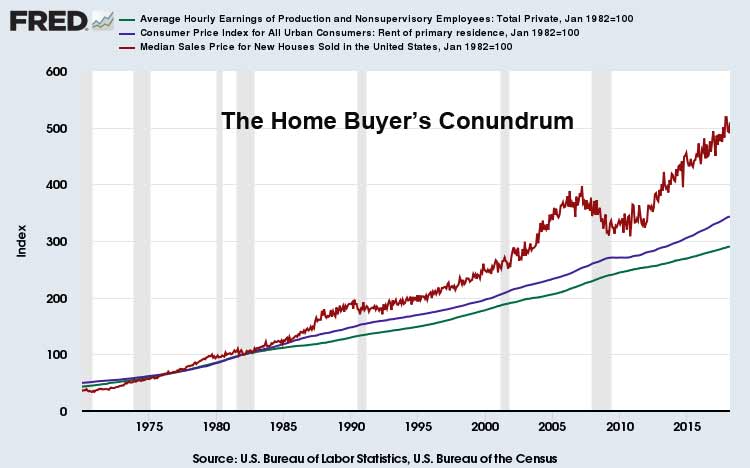