Other major metro U.S. markets are seeing home inventory increase by as much as 90 percent. This was an inevitable point in the latest housing market cycle, for reasons that were obvious to anyone paying attention. Unfortunately the list of those paying attention excludes the real estate editor of the Dallas Morning News and most of the ridiculous economists often cited in the the garbage that Dallas’ largest newspaper passes off as news.

DFW’s largest newspaper still seems to be oblivious to the fact that the latest boom in Dallas real estate prices was directly caused by central bank intervention. We can argue about the degree/percentage of house price inflation caused by the Fed’s market interventions, but the evidence is overwhelmingly obvious to anyone bothering to look, that local real estate prices were directly affected by the Federal Reserve and their balance sheet expansion (part of the Great Recession cover-up).

If this chart doesn’t help you understand that, there is probably nothing that will… 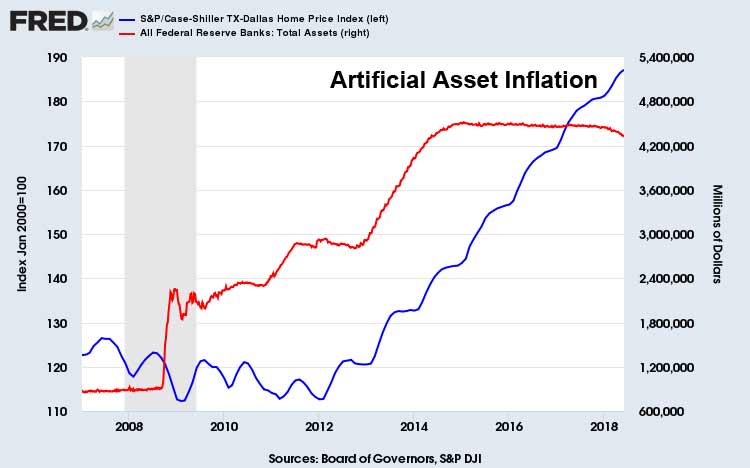 Like all artificial sweeteners, the Fed’s asset-levitating policies come with an unpleasant aftertaste. Here in Denton County were are now beginning to see what happens when the Fed decides to remove some of the cocaine and heroin they injected into the markets. The Fed has only removed a fraction of the stimulus contained in their massive balance sheet, and home sales have already stagnated while inventory is beginning to climb noticeably higher. Active listings of homes have skyrocketed in several U.S. metro markets. California hot spots and Denver Colorado are seeing a huge increase in the number of homes available for sale as owners look to unload their high priced (artificially inflated) inventory.

Now that area home prices are at record highs and area sales are beginning to stagnate, some people are actually waking up to the reality that DFW home prices really are in a bubble. It’s a bubble created by central bank intervention, and unfortunately, there is no painless resolution to the problem. The collapse in Treasury yield spreads is waving a giant red flag, even as Jerome Powell and his cronies at the Fed proclaim that all is well in the land of milk and honey. Apparently the Fed is going to keep hiking until something breaks. Actually there are a number of markets that could break, but that’s a different discussion for another day.

For now just realize that the magical fairy who re-inflated area home prices has once again created another predicament for prospective home buyers and sellers. Those who sold a home within the last 12 months likely captured some of the best home price appreciation that we’ll see for quite a while. Those sellers who went fishing likely missed out on a great opportunity to capture some home equity.

Current figures show that the number of homes for sale in Denton County is 17 percent higher than August of last year. If sales continue to stagnate, the months of inventory will likely continue to grow. If you are a prospective home seller, I can help you get your house in order for a successful sale.