The National Association of Realtors reported existing home sales for November at a seasonally adjusted annual rate (SAAR) of 5.32 million. This was up slightly from October but still down seven percent compared to the same time last year. The spike in mortgage interest rates was still lingering over the real estate market in November.

Today the FOMC followed through on another 25 bps hike in the Federal Funds rate, and Mr. Market was not too pleased because the Federal Reserve still expects to hike rates a few more times next year. It would appear Mr. Powell and his colleagues on the FOMC are still drinking the Koolaid, offering the same spin about a strong job market and their dual mandate.

“The Committee judges that some further gradual increases in the target range for the federal funds rate will be consistent with sustained expansion of economic activity, strong labor market conditions, and inflation near the Committee’s symmetric 2 percent objective over the medium term. The Committee judges that risks to the economic outlook are roughly balanced, but will continue to monitor global economic and financial developments and assess their implications for the economic outlook.”

The one bright spot for housing, if there is one, is that the Federal Reserve’s latest rate hike caused the 10-Year Treasury yield to slide even further, touching 2.76 percent today. If you are wondering how yields could actually drop when the Fed hikes the Fed Funds rate, it is helpful to remember that the Fed has much less control over the long end of the yield curve which is more heavily influenced by the strength of the real economy and real end user demand. Those falling 10-Year yields are flashing a big red warning sign that we could soon be in a recession if the Fed continues hiking rates while also draining their balance sheet.

The yields on longer dated Treasuries are suggesting the U.S. economy has a severe case of the flu. It remains to be seen whether the economy will need to be admitted to the ICU. A few more rate hikes could well lead to a full cardiac arrest for a patent that has been boozing on virtually free liquidity for a number of years. We are witnessing the moral hazard of market intervention by the Federal Reserve, a credibility trap of their own making. And what a fine mess it is. 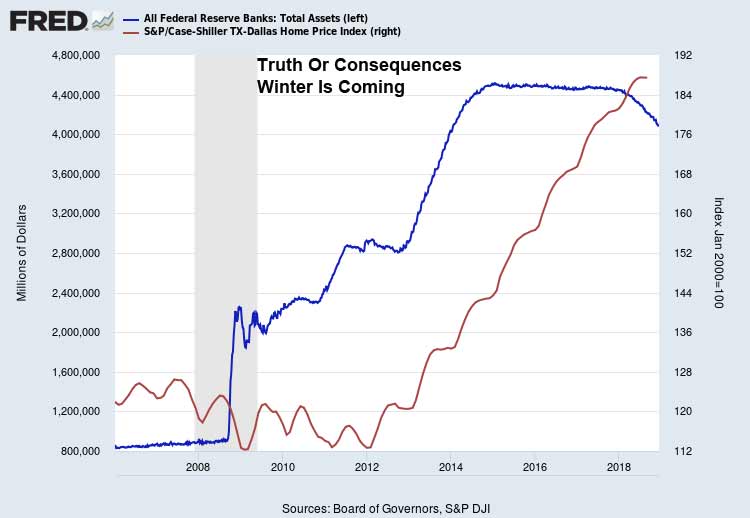