The Denton County real estate market is getting a much-needed lift going into the spring selling season. That lift is coming courtesy of crashing bond yields and a drop in mortgage interest rates. Lower interest rates were desperately needed to stimulate a stagnating housing market. The Freddie Mac Primary Mortgage Market Survey confirmed today what many have been expecting…. a continued drop in mortgage rates. Freddie Mac’s index just posted the biggest one-week drop in a decade. If the economy continues to slow, 3 percent mortgage rates could be in play again. That could be a mixed blessing.

The crashing yield curve at various ends of the spectrum is again flashing warning signs that the U.S. economy is under significant stress. More specifically, U.S. consumers are under significant stress and this dilemma is keeping central bankers up at night. This is why former bubble-blowing Fed chair Janet Yellen was hitting the airwaves this week with advice on how to increase wealth inequality in the United States even further. Yellen suggested the Federal Reserve didn’t have enough tools in their crony capitalist toolbox so the Fed should be allowed to buy up stocks and corporate bonds to keep the Ponzi scheme going. As Jesse Colombo eloquently stated, Yellen is proposing that the Fed “compound moral hazard on top of moral hazard.”

While Yellen suggested she didn’t see a recession in the cards, she offered that the bond market could be hinting at the need for a rate cut. Apparently fundamental economic principles are still a grasp for current and former Fed chairs.

The Denton County real estate market is currently benefiting from the drop in mortgage rates, homes are seeing a solid bid, particularly in the lower price bands. Affordability is improving with lower rates, and affordability in the DFW real estate market is still what’s lacking. This is why more DFW home sellers are chopping list prices this year.

The price cuts are more pronounced in the higher price bands. This is because Denton County and the DFW area have more luxury homes available for sale, and most of the action in the current real estate market is in the lower price bands. Fixed-incomers are still in a pickle if they want to downsize, because the price per square foot of smaller homes is off the charts at record highs. Scaling down a 1000 square feet in size doesn’t get you much of a discount on price in many areas. Millennials don’t want to buy large sprawling homes, because many of them are dealing with debt burdens and other issues. Affordability is still a major problem in various segments of the U.S. real estate market.

This same dynamic is playing out with new home builders as well. Builders in Denton County continue to delve into the more affordable price bands, by shrinking the size of the homes they are selling. You can find a new home for under $400,000 in Denton County, but you are often getting a lot less square footage for just a slightly lower price. It’s like the magically shrinking portions at the grocery store when the price remains sticky. Either way, you are getting less for your money.

In related news, the National Association of Realtors reported that pending home sales dipped slightly in February, this coming after a solid January rebound. The pending sales index was 5 percent lower in February compared to a year ago. It also posted the fourteenth consecutive year-over-year decline. Lower rates are going to help stimulate sales, but there are still a number of issues for the housing market to worth through.

This is the new housing market, a bifurcated mess brought to you by the Federal Reserve bank.

This is a reminder that massive tax cuts for Wall Street and corporate America have not and will not produce lasting GDP growth. This chart only goes back to October 2018, before the U.S. government experienced the largest monthly deficit in history during the month of February. 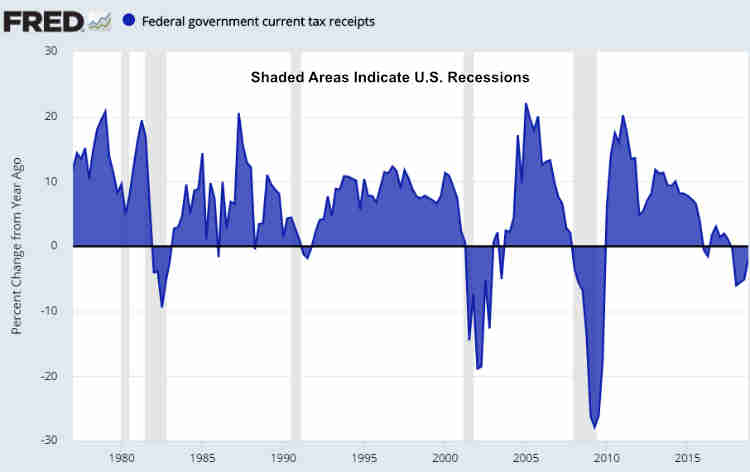