Plunging mortgage interest rates lifted Denton County home sales to a near record month in July. Home sales in Denton County posted a 14 percent year-over-year jump on record high average prices. The average price of a home sold in Denton County last month was a record $374,130. The surge in sales during July helped to offset the sales decline in June, and year-to-date sales are now slightly in positive territory. If you read Dallas’ largest newspaper, the July rebound in the housing market was all about the strong economy and fabulous jobs market. In truth it was a stick save for the housing market resulting from a complete capitulation by the Federal Reserve and massive trickle-down fiscal stimulus helping to keep the stock market afloat.

Denton County was a standout performer for the month of July, outpacing the DFW area as a whole in terms of the sales gain. Dallas-Fort-Worth home sales rose about 5 percent compared to year ago. Pending sales for the DFW area look like they will manage a 5 percent increase in July. I’m not convinced the DFW area actually had a record month for home sales in July, regardless of the headlines you may read in the Dallas Morning News. The last few press releases show that the original estimates for sales volume were on the high side. We could end up being a few 100 sales shy of the record seen in May. It’s important to remember that the sales stats cited in the major media (compiled by the A&M RECenter) are statistical estimates, subject to error, and sometimes by more than they should be.

The dramatic fall in mortgage interest rates is still filtering through the new home market better than the resale market. New construction sales in the DFW area jumped roughly 20 percent during the month of July, while sales of preowned homes (the bulk of sales) rose just 4 percent. Pending contract activity for resale homes was basically flat for the month of July while pending contracts for new homes rose 17 percent.

So far this year, new home builders have been responding to the challenge of building more affordable homes. Sellers have been reluctant (or in some cases unable) to meet the demand for lower prices. In reality, home builders are just giving buyers less home for the same amount of money. DFW’s median price per square foot for new construction in July easily eclipsed the previous record in May rising to $139 per foot in July.

While DMN real estate editor Steve Brown was busy butchering another monthly press release in his confusion about preowned homes, he also provided another entertaining quote from Metrostudy housing analyst Paige Shipp. Shipp gets the cheerleader of the month award for this glorified sales pitch:

“It’s shocking that mortgage rates are so low…I hope buyers take advantage of this, as I don’t foresee them dipping lower.”

Apparently Ms. Shipp hasn’t heard of this thing called the global bond market. Apparently she’s completely oblivious to the $15 trillion in global bond debt with negative yields. Numerous portions of the U.S. yield curve are already inverted, a clear signal that rates could absolutely go lower. Maybe if she did a little more reading, Shipp would find out yields on Danish mortgage bonds recently turned negative. In Layman’s terms, Danish banks will pay you to buy a house with borrowed money. Think about that one for a second.

For their part, the Real Estate Center at Texas A&M continues to be devoid of any “insight”, primarily because they refuse to mention the Federal Reserve’s entanglement with the housing market. It doesn’t help that the RECenter’s housing sales index is extremely flawed as well. They must be using a seriously magical trend-cycle component to get that upward slope for Texas sales activity, because their index bears little resemblance to the rolling average of actual closed home sales in DFW… 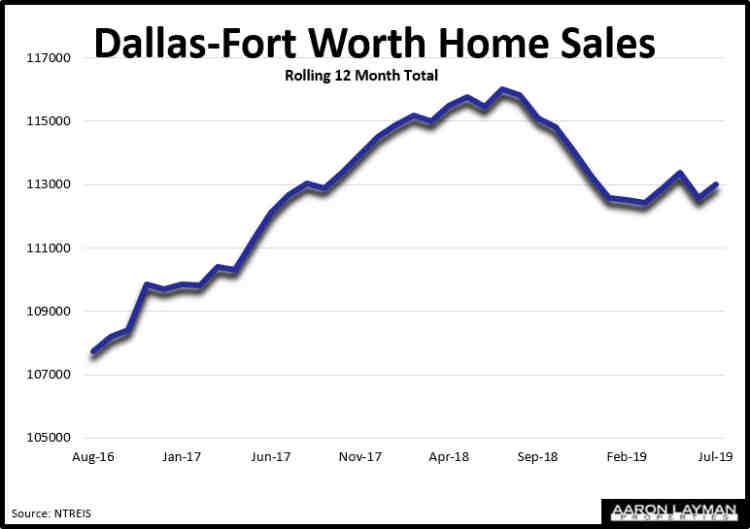 Make no mistake, July was a great month for home sales in the Dallas-Fort Worth area. It was even better in Denton County. Prices hit new all-time highs in many areas, and home inventory growth seems to be stabilizing a bit after spiking higher this year. That doesn’t mean the fun will last. It took a huge drop in mortgage rates to stabilize stagnating home sales, and the Fed is already capitulating on normalizing policy. The recent “mid-cycle adjustment” from Jerome Powell is likely the start of larger move back to zero (or lower) for the Fed Funds rate.

The reason is simple. The endless growth narrative and consequences-free “recovery” you have been sold is a massive lie. Wealth inequality in the U.S. is at record highs and the debt just keeps piling up. If you think these are sustainable trends, you haven’t been paying attention. 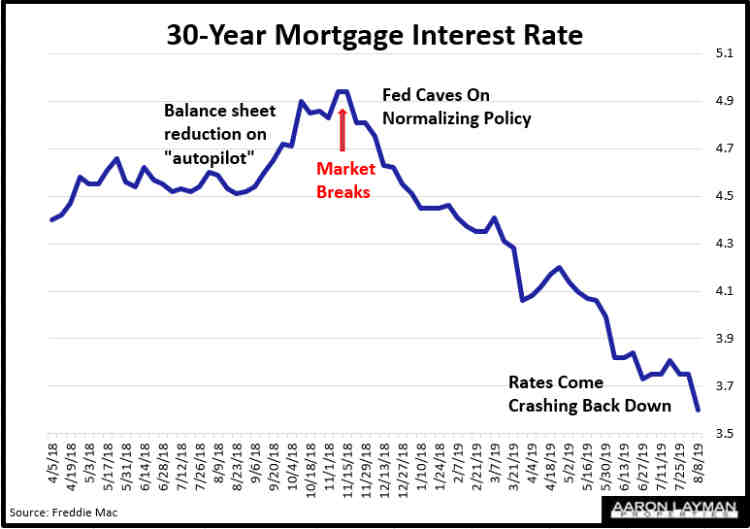 The Federal Reserve’s 25 bps cut didn’t come close to addressing the inverted yield curve. There will be more cowbell to come. 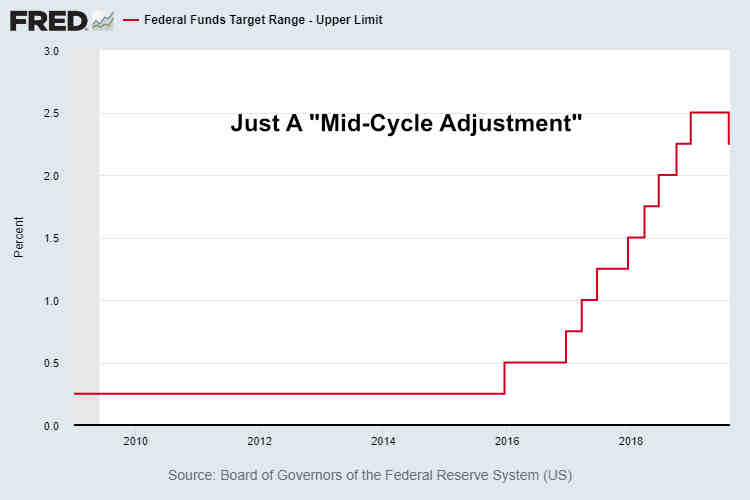 The total system debt in the economy keeps spiraling higher because nobody in power wants to make the hard choices and spoil the party. 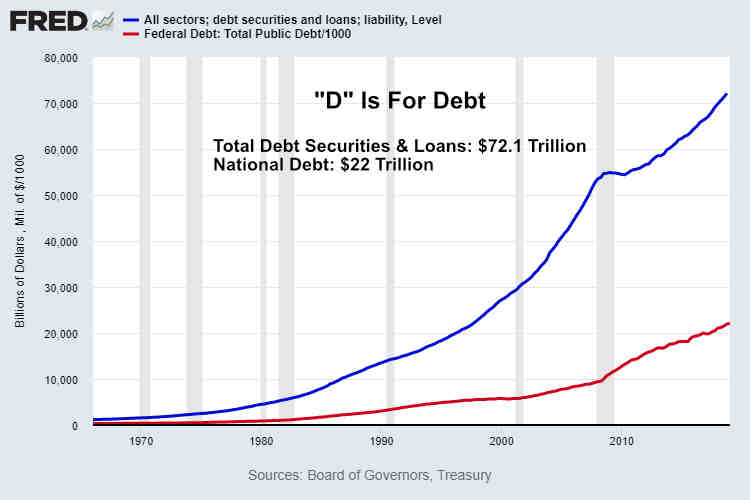 The Fed remains monetarily incontinent and utterly devoid of leadership. 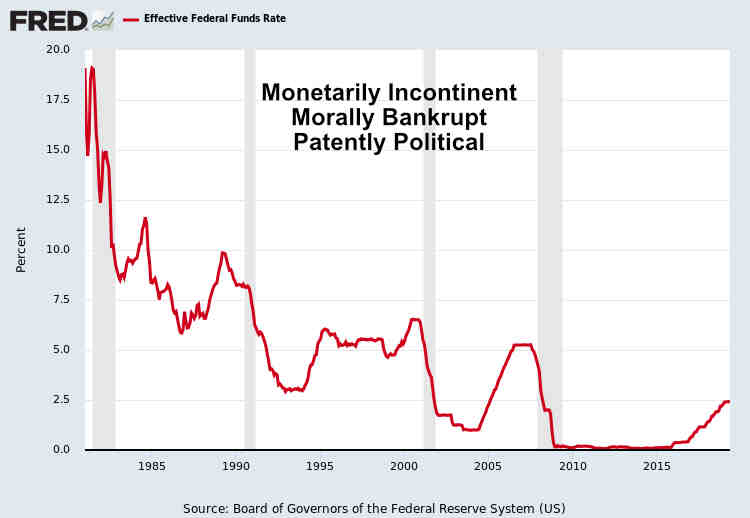 For Trump, Powell and the FOMC, the solution is obviously more cowbell. One has to wonder how long it will be before the U.S. is “exploring the space” of negative yields.