It has been an exciting week, and it’s only Wednesday. After a massive market ramp on Monday failed to extend into a two-day rally, the Federal Reserve did what many, including myself, expected them to do. Jerome Powell and his central bank cronies pulled out an emergency 50 basis point cut to the Fed Funds rate. The Fed rate cut was little more than the Fed playing catch-up to the actual drop in market rates which were crushed by the ongoing coronavirus economic blowback.

The Fed’s poorly telegraphed rate cut was followed by a near 800 point drop in the Dow on Tuesday after Wall Street crybabies realized that interest rate cuts don’t cure viral infections. Rate cuts are a poor solution when the world’s second largest economy, China, sees a half year of GDP growth go down the toilet. But that didn’t stop Powell and company from placating Trump to a minimal degree and at least pretending to do something useful. Pretending to be useful has been about the best we can expect from the Federal Reserve during the past few decades.

After crashing below the historic barrier of one percent, the yield on the ten year Treasury note is still not buying into the “recovery” theme. It would appear any real economic recovery is going to be dependent on a quick solution to the coronavirus pandemic, a solution which is currently not in the cards. The best we can hope for is that the pandemic runs its course in a short time frame with minimal deaths and economic disruption. As the saying goes, hope for the best, but prepare for the worst.

So far the U.S. real estate market has taken the coronavirus pandemic in stride. That could change if the markets swoon any lower and large sums of “paper wealth” suddenly become illiquid, or vanish altogether. This is the kind of volatility and uncertainly that hit the local housing market at the end of 2018, when luxury home prices began tanking and home sales volumes saw double-digit declines.

For the time being, the housing market is feasting on record low rates. The latest weekly survey from the Mortgage Bankers Association shows the purchase application index still up 10 percent year-over-year. The refinance index is up a stunning 226 percent from the same week one year ago.

The liquidity trap in which the Fed now finds itself has been a long time coming. The latest bout of market volatility should not have been a surprise. The larger question now is what (if anything) will the Fed be able to do when we have a real economic emergency. A 10 percent correction in the S&P stock market index hardly qualifies as a life-threatening emergency, but Federal Reserve officials are behaving as though it is. That should concern everyone. Welcome back to the Federal Reserve Waffle House, where central bank incompetence is always on the menu. 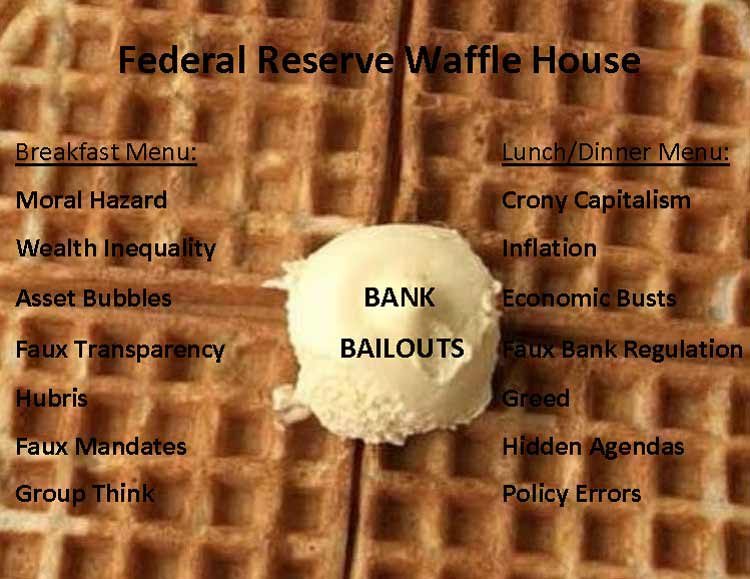