The North Texas housing market is being hit with two viruses. The Covid-19 coronavirus and the subsequent lockdowns which halted economic activity resulted in a 26 percent decline in home sales in May. That was the worst annual decline for the Dallas-Fort Worth housing market in a decade. Contrary to the story spun in the area’s largest newspaper it wasn’t the pandemic that “chased buyers away”. The 42 million new unemployment claims and a cliff dive in the stock market were responsible for that. It’s difficult to get a mortgage when you are on unemployment, even if you are receiving more money from unemployment checks than when you were actually working.

Fast forward a few months and the stock market just went green for the year with the Nasdaq setting a new all-time high. This was after the most fraudulent employment report in U.S. history was released by the BLS. The BLS admitted there were a number of errors in the May employment report, but those miscalculations didn’t make it into any of the headline numbers. Combined with the Fed’s gargantuan $7.16 trillion balance sheet and some massive Wall Street bailouts, the economic uncertainty caused by Covid-19 seems to have magically disappeared if you ask many economists.

That brings us to the second virus which is still plaguing the North Texas housing market, that being the Federal Reserve. By flooding the market with an additional $3 trillion in new liquidity since the pandemic hit, the Fed has effectively euthanized capitalism as we knew it. While the Fed officials are pretending we have an economic recovery, they handed out over $300 billion in repo loans to Wall Street trading firms last week. The Jerome Powell Fed has also re-ignited those animal spirits of hedge funds looking to capitalize on real estate asset price inflation. QE 1, 2 and 3 now look like child’s play compared to the wealth & income inequality monster which was just unleashed on the markets. If you want to eliminate any and all price discovery in the housing market, this is one way to do it… 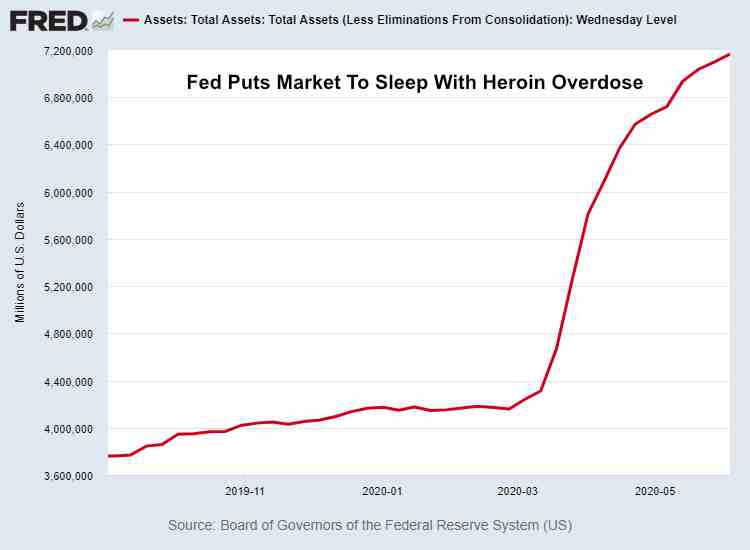 To see how the Federal Reserve virus is affecting the North Texas real estate market, you can overlay the growth of home prices in the DFW area with the Fed’s balance sheet following the Great Recession. That is easy enough. What’s not easy is getting the area’s largest newspaper or any local economist to discuss it. The Fed’s distortion of real estate markets is probably one of the most obvious housing market distortions, yet even the Real Estate Center at Texas A&M and their team of economists won’t talk about it. 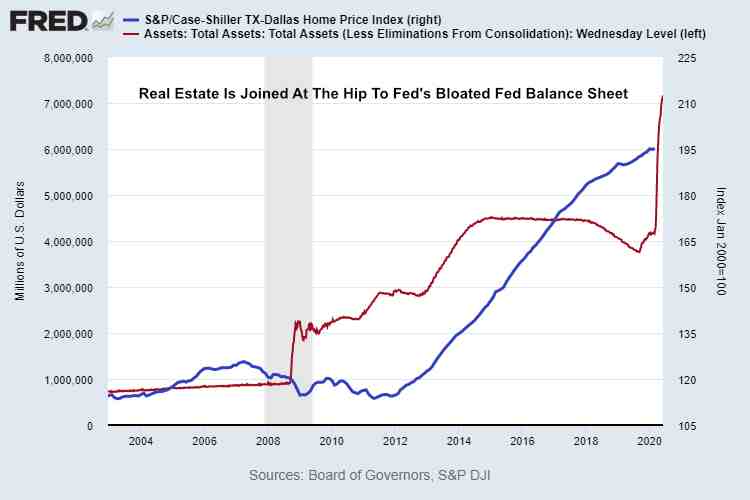 Updated Trends data indicate that pending sales for the DFW area jumped about 10 percent in May. That’s certainly encouraging. It’s also several percentage points less than what was reported in the official press release produced by the A&M RECenter. The folks at the data integrity unit are apparently dropping the ball again with their algorithms for North Texas home sales estimates. The pending sales increase for May is good news; Don’t get me wrong. The problem is that the local newspaper is talking about pent-up demand as if it will continue through the summer and fall. That bottled-up demand may not last as long as some are counting on.

Sales activity this summer should be relatively good given pent-up activity that is now being unleashed. The problem with the continued rebound story is there are still millions of unemployed Americans who won’t be able to get a mortgage even if the stock market is green for the year. There is also the inconvenient fact that unemployment stimulus checks which are paying many people more than their former jobs are about to run out unless Congress approves another round of funding. The extra $600 per week that unemployment recipients were receiving is about to come to an end. Corporations which received PPP loans continue to shed employees even after they have taken government (aka taxpayer) assistance.

While sales activity is going to see a temporary rebound, actual home prices in the DFW area are at record highs. Headline numbers will report that median and average prices for DFW homes fell slightly in May, but the truth is a bit more complex. Looking at prices on a square foot basis, DFW home prices hit new record highs in May. The median price of a Dallas-Fort Worth home rose 2.3% in May hittting a record $134 per square. The average of $140 tied the record set last month. The average price of a new DFW home hit a brand new record of $147 per square foot. The overall price of a new home might be falling, but buyers are getting less actual home for their money.

While inflating the cost of a home, the Federal Reserve asset inflation virus has helped push available inventory in the DFW area down to just 2.7 months of supply. By preventing the market from clearing, the Fed has encouraged potential home sellers to keep their properties off the market. At the same time the Fed has helped new home builders offload a good chunk of their inflated inventory, at record high prices. With builders taking advantage of the virus- induced inventory shortage, new home sales went on a tear the past few months. New construction inventory plummeted 28 percent in May falling to just 3.3 months of supply. That’s the lowest supply of new homes for the DFW area since 2008!

With pending sales of new homes shooting through the roof in May demand for affordable homes has remained strong. Multiple offers are now common again (at least temporarily) on starter homes in the lower price bands. The levitation of the stock bubble has also helped to put a bid back into those oversized McMansions. In the middle things are a bit more murky.

Denton continued to perform better than the DFW averages this year. Sales declined 22 percent in May, but pending home sales rose 13 percent. The median price of a Denton County home was basically flat at $322,750, with the average prices also flat at $368,953. The supply of homes in Denton County plunged 31 percent last month to only 2.4 months of supply. Not surprisingly, the median and average price per square foot of a Denton County home hit new records of $145 and $146 respectively.

For those who are finding it challenging to find good North Texas homes for reasonable prices this summer, you have plenty of company. Welcome to the real estate market created by central bankers!