I have been monitoring the contracts for home purchases in the North Texas area since last week, and the numbers are not encouraging. The number of active option contract properties (listings where the home has gone under contract with a buyer option to back out) continues to shrink. This is not surprising considering the economic backdrop, but it also points to a more prolonged downturn than many in the real estate industry were expecting. Pending sales data for March will not be pretty, but the April data for North Texas home sales could be an unmitigated disaster.

The hopes for a V-shaped recovery in the U.S. economy continue to dwindle. The government’s Paycheck Protection Program (PPP) designed to provide relief to small businesses through the Small Business Administration was supposed to be rolled out today, but there are already some glitches. Some businesses are already running into problems with the loan application process. Millions of Americans will have to wait weeks, if not months, for their stimulus checks to arrive from the government. Not exactly an ideal scenario where nearly 10 million people have filed unemployment claims during just the past two weeks.

Wall Street bankers are already swimming in additional liquidity and lifelines from the Federal Reserve, while working Americans are still worrying about whether they can make their next mortgage or rent payment. Renters in the Denton area were voicing their concerns at a town hall on Thursday. There is already talk of a potential wave of mortgage defaults should things deteriorate further. Many borrowers did not have a cushion for making mortgage payments, and that was before they lost their jobs. A mortgage deferral or modification may not help for many cash strapped borrowers. The largest mortgage lender in the country, Quicken Loans, is apparently waking up to the potential problem ahead.

“If a large percentage of the servicing book — let’s say 20%-30% of clients you take care of — don’t have the ability to make a payment for six months, most servicers will not have the capital needed to cover those payments.” Jay Farner – Quicken CEO

There are still a lot of moving pictures, but until we bend the Covid-19 curve things are probably going to get worse before they get better. The U.S. economy was not built to be shut down, that much is true. What’s also underappreciated by main stream media and most economists is how susceptible the U.S. economy is due to massive wealth and income inequality. That inequality even extends to the healthcare system. Matt Taibbi summed up the current situation, noting that government officials are bailing out the last bailout.

“We’re about to find out that the American economy has been living off dying, dysfunctional, or hyper-leveraged markets for more than a decade.”

There are going to be some profound consequences for the real estate industry, that much we already know. Both commercial and residential real estate are getting hit with this downturn. Policy responses will largely determine the winners and losers. The initial $2 trillion bailout package is not encouraging in terms of what’s in store for residential homeowners. So far, the relief to working Americans pales in comparison to the $trillions already thrown in Wall Street’s lap.

To put things in perspective, millions of Americans are waiting for a $1200 check to pay their bills. That check may take months to arrive. Meanwhile, the Federal Reserve handed Wall Street $1.5 trillion in new liquidity lifelines during just the past three weeks. Helicopter money has already fallen from the sky for Wall Street bankers, but working Americans are still waiting in line for help.

For a taste of what’s in store for the U.S. .housing market, we can look at what just happened to U.S. motor vehicle sales. Total vehicle sales collapsed over 30 percent in March to 11.66 million units. April will likely be worse. 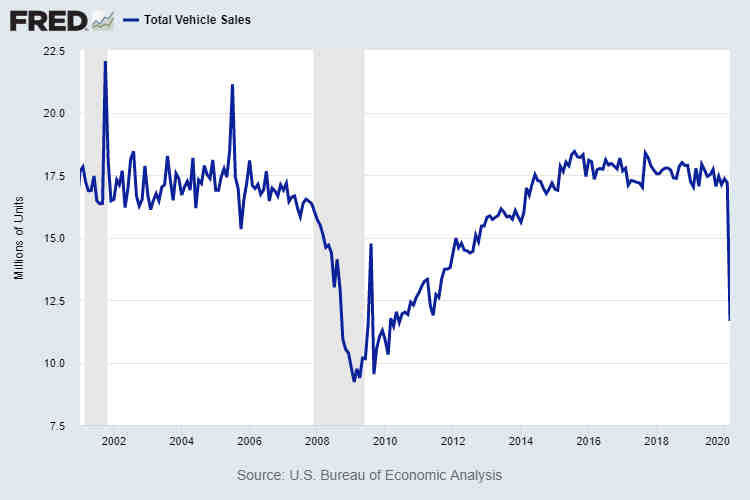